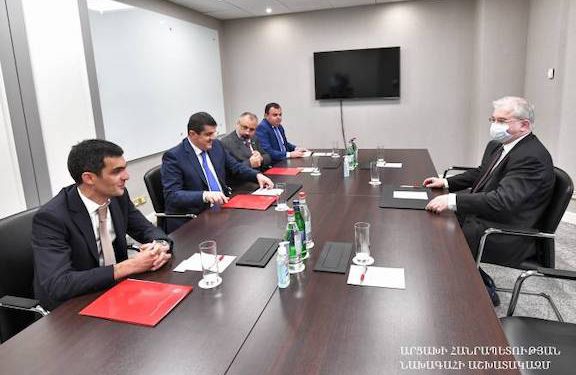 The newly-installed Russian Co-Chair of the OSCE Minsk Group, Igor Khovayev, met on Monday with Artsakh President Arayik Harutyunyan in Yerevan, where the issues related to the resumption of Karabakh conflict settlement talks were discussed.

Hautyunyan and Khovayev discussed the possibility of a visit by the Co-Chairs to Artsakh, with Harutyunyan praising the Russian peacekeeping mission in the region.

Artsakh Foreign Minister David Babayan also took part in the meeting and told Public Radio of Armenia in an interview on Tuesday that the United States, Russia and France have the general understanding that the OSCE Minsk Group Co-Chairs should resume its mediation efforts.

“They have never ceased their activity, but have not been very active due to well-known reasons,” Babayan said, stressing that all preconditions exist for the settlement process to enter a more active stage.

Babayan told Public Radio of Armenia that the self-determination of the people of Artsakh remains a priority and the Armenian side will keep the issue high on the agenda.

To that end, Mirzoyan told Khovayev that Azerbaijan must return all Armenian prisoners of war and captives being held in Azerbaijan.

Khovayev and Mirzoyan emphasized the importance of resuming the OSCE Minsk-Group mediated peace process, with Mirzoyan saying that Yerevan supported the joint statements issued by the Minsk Group co-chairs who stressed the need for a stable and lasting settlement of the conflict based on previously discussed principles and elements.