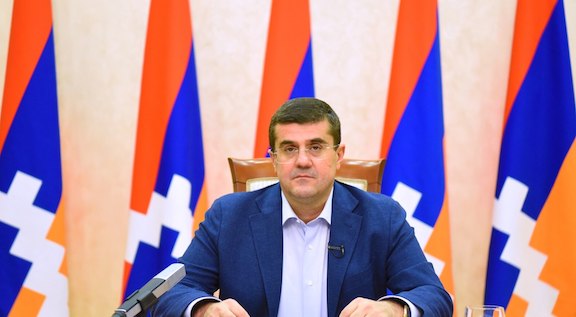 In an effort to appoint a new government, Artsakh President Arayik Harutyunyan on Wednesday dismissed nine of his 11 cabinet ministers.

Artsakh’s defense and interior ministries were the only ones that were not changed.

Among the noteworthy dismissals were Foreign Minister David Babayan, Justice Minister Zhirayr Mirzoyan and Aram Sargsyan, the urban development minister, all of whom were appointed as interim ministers until a replacement is named. Hayk Khanumyan, Artsakh’s territorial administration minister was also dismissed. In the interim his deputy Vardan Beglaryan will assume the duties.

Harutyunyan on Tuesday also recalled amendments to Artsakh’s constitution that were earlier adopted by the country’s parliament.

His office said that the recall based on “various political assessments voiced during the initiation of the constitutional changes, as well as the negative public reaction about the bill, which could become another reason for internal divisions and tensions.”

“The president believes that domestic solidarity and unity are our greatest powers and the most important guarantee for honorably confronting the existing challenges in this very difficult stage of state-building,” Harutyunyan’s office said.

The move also comes a week after Russian-Armenian billionaire Ruben Vardanyan assumed the role of Artsakh’s State Minister with broader powers than his predecessors. Earlier this week, Vardanyan, who renounced his Russian citizenship and moved to Artsakh earlier this year, said that during this crisis period new approaches to government were necessary.

The prospective appointees will not necessary be from Artsakh, but also Armenia and the Diaspora.

According to Vardanyan’s political adviser, Mesrob Arakelyan told Azatutyun.am that new appointments to the ministries were forthcoming, saying that discussions were underway. He did not mention any names.

Babayan, Artsakh’s interim foreign minister, told Azatutyun.am that changes to the cabinet were not unusual, vowing to continue to serve his homeland.

As has been the case in such instances, Armenian media outlets began speculating about specifically Babayan’s replacement. One name that was mentioned on various news sites was Armenia’s former foreign minister under Robert Kocharian’s administration, Vartan Oskanian. Another name that came up was Ara Aivazian, who resigned his position as Armenia’s foreign minister when Azerbaijani forces first invaded Armenia in May, 2021.

Arakelyan, the state minister’s adviser, told Azatutyun.am that Oskanian’s name is not being considered, but did not comment on Aivazian’s prospects, saying an announcement will be made when a decision has been reached.

Aliyev Says He Will Not Attend Planned Meeting With Pashinyan