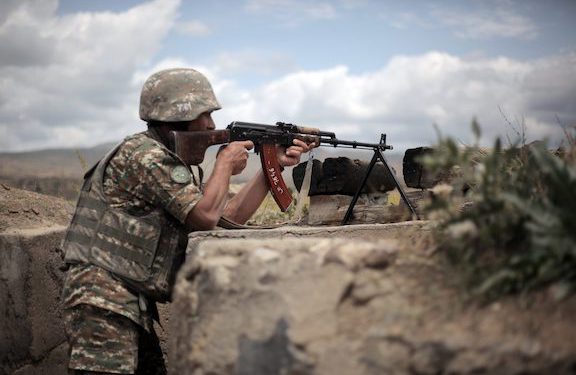 Artsakh’s Defense Ministry has denied reports from Baku, which claimed that Artsakh Defense Army soldiers opened fire on Azerbaijani forces in the villages of Yukhari Veysal and Sghnakh, as well as near Shushi.

“It is obvious that with such false statements Azerbaijan is laying the groundwork for further provocations,” the Artsakh Defense Ministry said in a statement, adding that Artsakh soldiers strictly observed the ceasefire and only take retaliatory measures to counter Azerbaijani attacks.

In a statement citing the peacekeepers, the Russian Defense Ministry said Azerbaijani forces carried out on Wednesday morning two “strikes” on a Karabakh Armenian outpost about 40 kilometers southwest of Stepanakert.

“The Russian peacekeeping contingent command took measures to prevent a further escalation of the situation. An investigation is underway,” added the statement.

Artsakh’s Foreign Minister David Babayan on Friday told Armenpress that Baku was waging a psychological and geopolitical war, commenting on earlier statements from Baku that claimed the November 9 agreement stipulated that Armenian troops would no longer be deployed in Karabakh.

“This is a multi-layered policy. The goal is to drive out the Armenians from Artsakh. And if that were to happen, an entirely different situation would to be created not only in Transcaucasia, but also in the wider region—Northern Caucasus, Middle East, Central Asia, Volga regions, and the Black Sea basin,” Babayan said.

The Artsakh Foreign Minister said that Azerbaijan is trying with military and other means to psychologically pressure the Armenians of Artsakh, to drive the people into despair so that they lose hope and change their minds about living in Artsakh. However, he said, all the attempts by the Azerbaijani authorities are doomed to failure, emphasized that “to live in Artsakh has become a mission.”

“We must continue to live here. Living here is already a kind of mission and not just an everyday existence. Therefore we must remain calm and continue our work and our service,” said Babayan. “Azerbaijan’s attempts certainly don’t impact us, but we must strengthen our people’s hope and faith even more.”

Babayan said that such an approach would require a comprehensive, common approach. “We must engage in the proper geopolitical and domestic policies,” Babayan said, stressing that all of this first of all requires people to recover from the stress of the war. kamikaze drones.