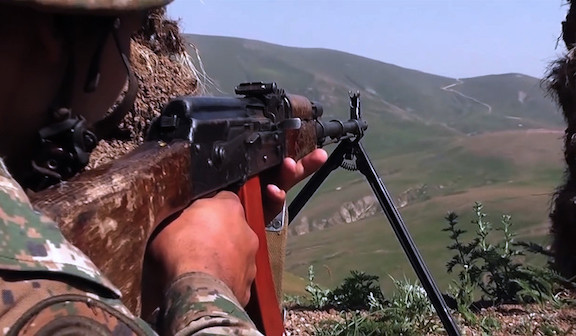 A soldier of the Artsakh Defense Army was injured after Azerbaijani forces violated the ceasefire in the Parukh village of Artsakh’s Askeran region, the Russian Defense Ministry reported on Tuesday.

The Parukh village is the epicenter of the most recent aggression by Azerbaijani forces, which invaded the area and proceeded to advance their position onto the strategic Karaglukh heights. This area is under the protection of Russian peacekeeping forces, whose ability to ward off Azerbaijani attacks has come under question.

“During the past 24 hours, the Russian peacekeeping contingent in Nagorno-Karabakh registered one case of violation of the ceasefire by the Azerbaijani armed forces in the Parukh area, as a result of which a serviceman was wounded from the Armenian side,” said a Russian defense ministry statement.

“The command of the peacekeeping contingent, in cooperation with the representatives of both sides, settled the incident,” claimed the statement.

“Continued cooperation with the General Staffs of the Azerbaijani and Armenian Armed Forces is maintained to ensure the security of Russian peacekeepers and to prevent possible incidents,” the statement added.

For several weeks before invading Parukh on March 24, Azerbaijani forces had been shelling the nearby Khramort village and through bullhorns and loud speakers were broadcasting threatening messages to the civilian population of Askeran. The messages warned residents to leave or be pushed out by force.