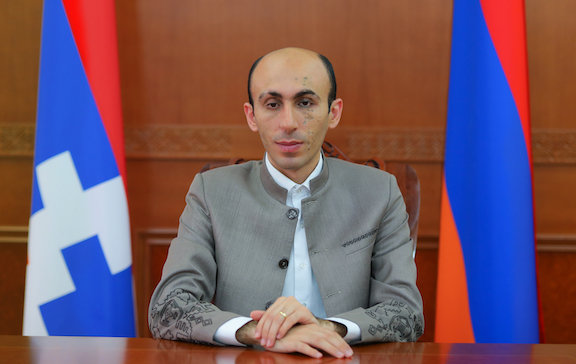 AMAA Board Member LindaKay Abdulian, President of National Raisin Company, is organizing this year’s Banquet and will serve as Mistress of Ceremonies. She and her husband, Dr. John Abdulian, are sponsoring the Banquet with the aim of introducing the work of the AMAA to the Fresno Armenian community, especially its youth.

Armenian Evangelical churches in the U.S. founded the AMAA in 1918 as their mission to re-establish Armenian Evangelical communities and churches in the Near East following the Armenian Genocide. That work greatly expanded following the 1988 earthquake in Armenia, the birth of the independent Armenian Republic, and Artsakh’s fight for liberation in the 1990s. The AMAA has since built and operated schools, day-care centers, churches, and Christian camps in Armenia and Artsakh, and, despite the devastation of the 2020 war, continues with resolve to care for the lives and spirits of impacted families and children.

“I’m looking forward to hearing from our speaker about what’s happening now in Artsakh, and how Armenians are coping,” said Abdulian. “Our family helped build a wonderful Christian camp that was destroyed and taken away during the war. It’s gone, but what we are upset about is that the ministry is gone as well. We’ve gotten letters from people who have thanked us for the Camp.”

State Minister of the Republic of Artsakh Artak Beglaryan, the Banquet’s guest of honor, attended AMAA summer camps in the late 1990s, and credits his Christian education there as helping develop his service mentality. During the 2020 war, he was serving as Human Rights Ombudsman of Artsakh, and he covered the war with daily public updates on war crimes perpetrated by Azerbaijan against the people of Artsakh.

Beglaryan lost his eyesight as a child when a landmine he found in his family’s yard exploded. His father had died in battle just two years earlier. He studied at a school for the visually impaired in Yerevan. After graduating from Yerevan State University in 2010, he subsequently studied business management in Thessaloniki, Greece as part of a student exchange program and took part in international programs and research fellowships in the Czech Republic and Switzerland. He went on to masters’ level studies at University College London in politics, security, and integration; and completed a public policy and administration program in the United States at Fletcher School of Law and Diplomacy, Tufts University near Boston.

Beglaryan has held several posts in Artsakh. He has also lectured at Artsakh State University on political science topics.

The AMAA Camp Beglaryan attended in his childhood was near Stepanakert. The Camp had moved to Shushi by 2003, and the Bedrosian family sponsored its program — investing around $600,000 in support of the camp programs and to pay for building renovations and a playground. Adjacent buildings included a Christian Education Center and AMAA Shushi office, which was completed with funding from the Bedrosian family and had only been used for a few months before the war started in September 2020. Camp Bedrosian served about 800 campers each summer.

During the 2016 and 2020 Azerbaijani attacks, the camp sheltered Armenian families fleeing violence. “The Bedrosian family has always felt that it is our Christian duty to help Armenians succeed,” said Bryan Bedrosian, LindaKay’s cousin and an AMAA Board member. “We are heartbroken for the Camp and for the people of Shushi. We hope and pray that Camp Bedrosian will return.”

LindaKay Abdulian has been actively involved with the work of the AMAA for 25 years, as a member of AMAA’s Los Angeles Child and Orphan Care Committee. “Through the AMAA, as you give your time and your talent, it isn’t even about how much you give or receive, it is about what you become,”said Abdulian. “I became a philanthropic person, committed to Armenian Christian causes. I kept up my involvement in the AMAA, because I saw a change in the children we were serving.”

As Banquet Chair and MC, Abdulian acknowledges that this is an extraordinary time and that everything is up in the air. Planning for the event continues as she keeps informed about external circumstances related to public health. Attendance will be limited to 200 guests, at tables of eight, in the large hall of Fresno’s First Armenian Presbyterian Church, which can easily accommodate twice that number. “The program will be brief, and we are honored to have such a great speaker!” concluded Abdulian.

AMAA Executive Director/CEO Zaven Khanjian spoke of this time’s suffering for the Armenian people as he reflected on his recent mission field trip. “I have seen the impact AMAA has on the lives of people all over. One life at a time. Upon my return from a four-week emotionally packed trip, I was asked to summarize what I took with me and what I brought back. It did not take me long to pack the answers in two simple but lauded words. I carried HOPE and brought back INSPIRATION. Carrying HOPE has always been the AMAA’s core mission.  In HOPE, the Good News of the Gospel taken to the ends of the world is bundled. HOPE is the remedy to despair and depression, the eyedrop to a blurred vision and the magical key to revival, rejuvenation, and resuscitation.”

The 102nd Annual Meeting of the Armenian Missionary Association of America will be held from October 21 to 24, at Pilgrim Armenian Congregational Church, located at 3673 N First St, Fresno, CA 93726, with the option to join virtually. The registration and meeting agenda can be found on the AMAA website.

Founded in 1918, the Armenian Missionary Association of America serves the religious, educational and social needs of Armenian communities in 24 countries around the world including Armenia and Artsakh. For additional information, visit AMAA’s website.