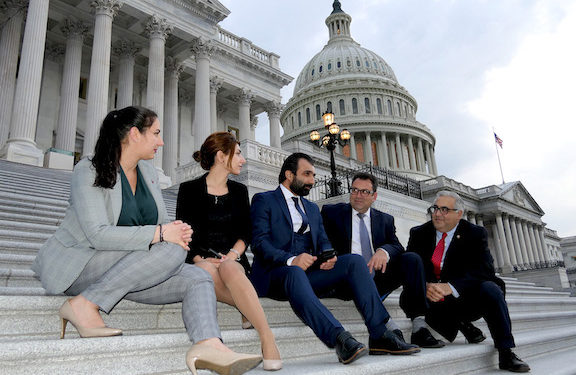 WASHINGTON—Award-winning Director Jivan Avetisyan and screenwriter Narine Voskanyan shared the powerful story of Artsakh’s struggles and survival through both film and eye-witness accounts, during a three-day Washington campaign to inspire community activism and inform Congressional action, reported the Armenian National Committee of America.

On Sunday, October 24th, Avetisyan and Voskanyan were joined by producer and longtime ANCA leader Garo Madenlian for the Greater Washington DC premiere of “Gate to Heaven,” a tour-de-force film set against the backdrop of the 2016 April 2nd to 5th Azerbaijani attacks against Armenia and Artsakh, commonly referenced as the 4-day war.  The event, held at the Soorp Khatch Armenian Apostolic Church Arabian Hall, was organized by the Washington ARF “Sebouh” Committee, in coordination with the local Hamazakayin Armenian Educational and Cultural organization, Armenian Relief Society “Satenig” chapter, Homenetmen Armenian Scouting and Athletic Association, Armenian Youth Federation (AYF) Ani Senior and Sevan Junior chapters, and the ANC of Greater Washington.

Speaking to an enthusiastic audience, Avetisyan offered heartfelt remarks about the role of the Armenian filmmakers in the aftermath of the 2020 Artsakh war.  Prior to 2020, through the making of his first three films – “Tevanik,” “The Last Inhabitant,” and “Gate to Heaven” – Avetisyan and his team had sought to share Artsakh’s story with the world.  Now, the director explained, it has become more important than ever for Armenians to tell their own story – to share their narrative of truth.  To that end, Avetisyan outlined an ambitious agenda of new films his team is working on, including the upcoming “Revival,” which is set against the backdrop of the 2020 Artsakh war, and which will include actual footage, shot by Avetisyan, documenting the Turkish and Azerbaijani attacks.

During an engaging question and answer session with attendees, Avetisyan and Voskanyan discussed their efforts to overcome ongoing Azerbaijani government efforts to undermine Artsakh film-making, noting how Azerbaijani government officials harassed actors in his films to drop their affiliation with Artsakh, sought to undercut international funding for his endeavors, and even pressured film festivals, including the Moscow Film Festival in 2020, to drop film showings.  Avetisyan and his team have remained undeterred, building an international network of support – from production companies to film studios and actors – and the effort has been well received.  Avetisyan explained that each of his new films has garnered increasingly greater international funding with “Gate to Heaven” receiving over 50% of production costs through non-Armenian sources.

“Revival” is his most ambitious project yet, with Avetisyan cooperating with multiple countries and film companies to ensure the strongest film with the broadest distribution. His goal, explained Avetisyan, is to become an Armenian flagship in the international film industry, to share our nation’s authentic message with the world.

AYF “Ani” Chapter executive member Areni Margossian, who served as mistress of ceremonies for the event, echoed Avetisyan’s message.  “With just one year since the start of the 2020 Artsakh war, I’m sure this film will strike many nerves that are still raw from the tragedy that befell us last year. Whether it was the four-day war of 2016 or the 44-day war of 2020, we Armenians are no stranger to stories of war and tragedy,” said Margossian.

“But the power of storytelling is crucial to ensuring that we do not lose our history into the void of time and that our voices are heard. It is even more imperative that we take ownership of the narratives that we want to tell. Whether we write dramas of historical fiction or documentaries of our history, it is vital that we Armenians are the ones telling our story,” concluded Margossian.

Avetisyan was in Yerevan on September 27th when Turkey and Azerbaijan started their attacks on Artsakh and Armenia.  Within days, he was in Artsakh’s capital, Stepanakert, working with local news outlets to document the brutal attacks on civilians and humanitarian targets, including the Stepanakert Maternity hospital, Mardakert hospital, schools, and churches. During in-person and online bi-partisan meetings, Avetisyan and Voskanyan shared first-hand accounts of the devastation during the war, and everyday challenges facing the over 100,000 Armenians displaced from their ancestral homes.

Hamparian and Yerimyan emphasized the grassroots Armenian American call to zero-out all U.S. military aid to Azerbaijan, expand lifesaving U.S. humanitarian assistance to Artsakh, and secure the release of over 200 Armenian POWs illegally held and tortured by Azerbaijan, more than one year after the tenuous November 9 ceasefire.

Prior to their visit to Washington, DC, Avetisyan, Voskanyan, and Madenlian joined ANCA advocates from throughout the Eastern United States at the 15th annual ANCA Eastern Region Gala in Philadelphia, PA, where ANCA Chairman Raffi Hamparian introduced Avetisyan as “Artsakh’s storyteller.”