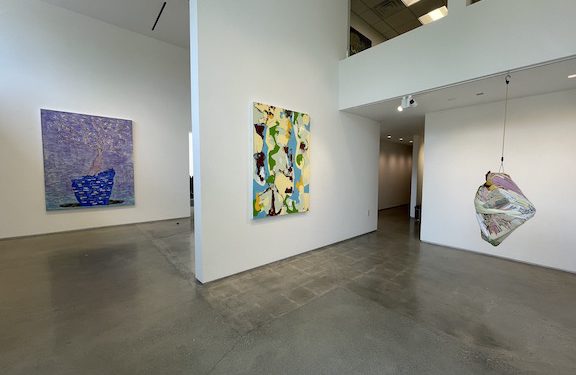 LOS ANGELES—Tufenkian Fine Arts is honored to present “A New Day,” an exhibition featuring bright uplifting works by Julia Couzens, Richard Hoblock, and Farzad Kohan. The exhibition opening reception will take place on May 15, from 2 to 6 p.m. and will be on view through June 26.

It’s A New Day, with Thanks to Nina Simone
BY CAROLE ANN KLONARIDES

Reconsideration, repurposing, recalibration, call it what you like, for artists Julia Couzens, Richard Hoblock, and Farzad Kohan, it is an ongoing process. Layering, marking, moving the paint (the eye never rests), weaving, wrapping, scraping (the hand keeps active), a cyclical loop of rediscovery. An inspiration, perhaps, is to reconstruct a new consciousness from the salvage of our yesterdays. Sometimes the old is reinvented yet the roots remain, and new growth appears, and as cliched as it sounds, a new day begins.

For Richard Hoblock, it began with writing screenplays commissioned as portraits; each portrait was an imagined cinematic scene, the patron as the protagonist with underpinnings of personal details they provided. As a skilled writer, he could have several subplots at variance with each other all happening at once. After a series of screenplay portraits, he began to make abstract drawings while looking at Baroque paintings, focusing on a gesture or detail. Referring obtusely to the act of writing, his leftover pencil stubs would be ground down using a Cuisinart into a fine carbon powder which was used as a ground and drawn into. When finished, they were photographed using an 8 x 10 camera, a digital file is created, and the original drawing was then destroyed (unintentionally so was the Cuisinart!) Each photographic print was unique as part of his “Baroque Series.” This practice of layering materials and procedures, several times removed from the original, began a cycle of deconstruction and improvement, a reauthoring with each transitional stage. Yet, it was not quite an appropriation as the original source of inspiration is not apparent. It is more a process of cite and re-citing.

According to the artist, he started painting seriously after seeing the Willem deKooning painting “Excavation” at the Art Institute of Chicago. An obsession with the work inspired many revisits to view it. The painting has an intensive build-up of surface that has been scraped to reveal underlying layers of paint and gesture, hence the title of the work. Starting with a color or off-white ground of paint, Hoblock also would build up layers and then scrape the surface with a palette knife or kitchen utensils, leaving the residue of previous layers along the edges as a visage of the process. Not quite a revival of gestural abstract painting, Hoblock puts it, “I went from concrete as a language to abstract as a gesture.” With such a calligraphic gesture, perhaps a screenplay is hidden within. However, it is up to the viewer to project their own, as his is not revealed with the exception of an occasional hint hidden within the title.

The most recent incarnations are vertically oriented abstract paintings that have dramatic virtuoso paint strokes of discordant colors. These seemingly would not go together but with his deft precision are found to abide on the same canvas. Fleshy pinks, cranberry reds with lipstick orange, and dull browns. Acid Green! White cutout shapes are held in front of the canvas to help the artist’s eye create the blank space needed to find the relationships within and around the gestures and forms—there can be no signature image as there is always contingency in the shifting relationships. The trajectory of this thought process finds a way for intuition to play; the outcome is not set. The work “Champion” was painted listening to the Miles Davis’ recording “Bitches Brew,” which similarly gives dead air and timing to punctuate each note creating a jarring, yet magnificent composition of discordant sounds. Replace sound with color and form and the same can be said about these gnomic paintings–what shouldn’t work comes together in a harmonious celebration of defiance.

Farzad Kohan prides himself as a self-taught artist always in-flux. His signature process of building up bits of ripped paper collaged on board or canvas, then distressed by sanding the surface, exposes layers of the passage of time and history of application like the age rings of a fallen tree. Ghostly bits immerge; gestures of automatic drawing, cursive lines of Farsi or Persian, the edges of torn magazine pages come forward and recede, much like distant memories. Having left his family and country of Iran at the age of eighteen, escaping first to Pakistan, then migrating to Sweden and later, settling in California, he weaves all of his past into the layers that make up his paintings and drawings with gradual transformations that sometimes hide the stories or hint at untold truths. As an émigré, a desire to be part of something bigger than himself drew him to art making; his work is imbued with a desired sense of belonging and new beginnings. The use of repellent materials, such as oil and water, perhaps metaphorically reflect the difficulties of assimilation, and his labor intensive procedures, the process of migration.

Inspired by a homeless man who creatively repurposed found objects, Farzad found his own economy of artistic material by using everything in his studio and surroundings. He taught art to children and learned from them, made his own paper, repurposed regional maps, created drawings and then ripped them to shreds along with discarded magazines (most commonly the local Iranian magazine Javanan), and then adhered them with water and glue in layers. For an additional pièce de résistance, in which an occasional fragment of fabric would be woven.

Lately, a series of works has turned more recognizably figurative. In each, he has firmly rooted a blossoming tree in a pot, with branches appearing to reach out of the confines of the perimeter of the rectangle. The arrangement of the carefully orientated strips of paper and the use of color is driven by form and texture. Slowly, he stopped sanding the surface, letting the paper bits layer like the bark of a tree. Underneath is evidence of the artist’s personal history, tangled lines that appear like the roots of many years of drawing automatically from the subconscious. As we walked out of his studio, he pointed to a cypress tree so tall it looked like it touched the sky. “See that, it was here the whole time and I never noticed it until recently.” I immediately thought of Van Gogh’s painting of cypress trees reaching to the sun and moon, with signature swirls and whorls in the heavy impasto. Van Gogh painted many trees, and in retrospect, the trees influenced by Japanese woodcuts are the ones that Farzad’s trees most resemble, with their minimal canopy and heavy outlines, a mastery mix of many historical and cultural influences. Not rooted in the ground but in a vessel, they are ready for transport to a new home.

As she approached the Little Flower Café in Pasadena, Julia Couzens eyed and then scooped up a doggie toggle pull toy left behind, a tight bundle of many colored strings that actually resembled some of her own sculptures. “Oh, this is so perfect for what I am working on!”, she exclaimed to me as she quickly stuffed it into her bag, a catchall for similar urban detritus she finds as she walks about. Her sculptures, which she calls “bundles,” are obsessively wrapped asymmetrical masses of rope, wire, string, yarn, bungee cord, fabric, and plastic, that have a textural physicality that gives the expression “tightly wound” a whole new meaning. Gathering, twisting, weaving, sewing, tying, all make up the form. The resulting structure, in its solidity with an occasional sharp angle, seems architectural, but is actually derived from a long history of drawing from the model or nature. Each sculpture begins like a drawing, starting with a line and continues until the intuited end with an aim to visually and physically build up layer after layer of contained energy. Like the Japanese tsutsumi (“wrapping”), used as protection for precious temple objects, one wonders if something worth protecting is contained within the sculpture’s inner core, but the contents (if there are any) are safely secured and hidden.

In making the bundles, process and materiality is something Couzens privileges over the conceptual. Whether conscious or not, her work counters the historical patriarchy of monumental sculpture. Sculptors Eva Hesse and Jackie Winsor, process and materials artists a generation before, offered a more organic approach in comparison to the minimal and conceptual work of Donald Judd and Robert Morris, whereas Couzens’ work is closer aligned to the work of Michelle Segre and Shinique Smith. Replacing the chisel with a needle, and casting with weaving,  each work has a sculptural monumentality that comes out of craft traditions. They are light of weight, and if I were to wax poetic, I could see them strapped on the body as one’s total belongings carried on a nomadic sojourn. The use of color is as a force, one different from contemporary sculpture primarily made of wood, stone, and metal, with a simultaneity of color combinations that express the ineffable.

Given a rotation of 360 degrees, each side of the sculpture provides a new vantage point with a new face. There is no totality or instant read, they operate in the space like alien forms whose origins one can’t quite define and are so self-contained that they seem natural on the floor, hung from the ceiling, or protruding from a wall. It is the bringing together of these repurposed and disparate materials tightly bound in all their brilliant splendor that sends off a charge like a bundle of electrical circuitry ready to combust.

To paraphrase Couzens from a recent online response to our times, “Art’s nature is exploratory, peripheral to linear progress and predetermined order. I think its meaning sprouts from the cracks in life.”  A bundle titled, “Sweet,” has a long shoot of bright green yarn that escaped and at its end is hanging a smaller bundle as if to say from the entanglements we make, there is always the possibility of something new thriving from the mess.