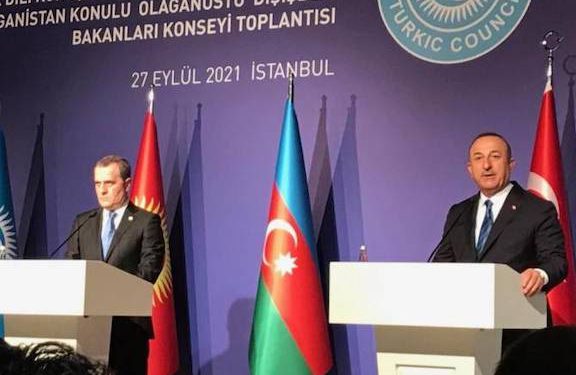 Azerbaijan’s President Ilham Aliyev, on the first anniversary of his country’s attacks on Artsakh, once again, made threats against Armenia, while Ankara said it will continue to impose precondition on Yerevan to accept Azerbaijan’s sovereignty in return for normalization of relations.

In an interview with Anadolou news agency, Aliyev, once again, insisted on the opening of the so-called “Zangezur Corridor,” which envisions a direct link between Azerbaijan and Nakhichevan through Armenia’s Meghri region.

“We are still being patient,” Aliyev told Anadolu news agency in an interview. “But our patience has limits too. The second Karabakh war showed what happens when our patience gets exhausted. Therefore, we are giving Armenia the opportunity to fulfill all terms of the November 10 statement and act responsibly.”

Cavusoglu said that Prime Minister Nikol Pashinyan lately has sent “positive signals” to Ankara but has yet to respond to offers made by Baku, referring to a proposal by Aliyev of signing a peace treaty, which stipulates that Armenia recognize Azerbaijan’s sovereignty over Artsakh.

“As you know, Azerbaijan has offered to sign a comprehensive peace accord with Armenia,” Cavusoglu told a joint news conference in Istanbul with Bayramov. “There has yet to be a positive response from Armenia.”

“As always, we will coordinate [Armenia-related] steps that we could take with dear Azerbaijan. We decide together, we take steps together,” Cavusoglu added, according to the Anatolia news agency.

Cavusoglu’s statements echoed those of Turkey’s President Recep Tayyip Erdogan, who earlier this month claimed that Pashinyan has offered to meet with him for talks to normalize ties, saying that the Armenian leader had enlisted the help of his Georgian counterpart, Irakli Gharibashvili, to schedule the meeting.

The Georgian leader on Monday said the he had proposed a platform for negotiations to Yerevan and Baku and highlighted his and Georgia’s role in securing the release of Armenian prisoners of war, which forced Yerevan to share sensitive maps of minefields with Baku in exchange for the release of the captives. This swap took place during Pashinyan’s election campaign in June.

Erdogan made such a meeting conditional on Armenia agreeing to open a transport corridor to Nakhichevan, which is Aliyev’s proposed “Zangezur Corridor.”

On Friday, Deputy Prime Minister Armen Grigoryan told reporters that Armenia was ready to engage in talks with Turkey “without any preconditions” despite Turkey’s destructive role in the 44-Day War.

Since the end of military actions in Artsakh, Erdogan has traveled to Azerbaijan, and accompanied by Aliyev, visited occupied Shushi, where the two signed a strategic agreement between Turkey and Azerbaijan, that include military assistance from Ankara to Baku.