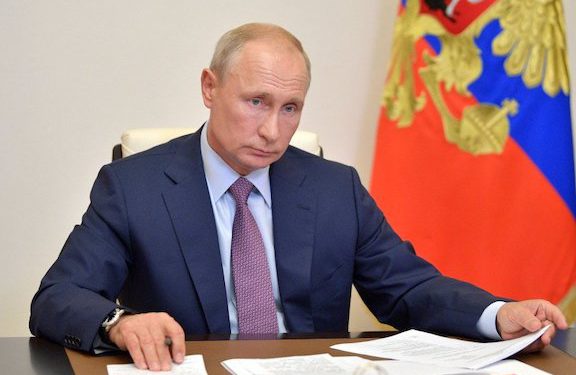 President Vladimir Putin of Russia on Thursday, once again, pressed for the demarcation and delimitation of borders between Armenia and Azerbaijan. Meanwhile, Prime Minister Nikol Pashinyan said that new Russian proposals on the process were “acceptable” for Yerevan.

Addressing diplomats in Moscow, Putin sounded optimistic about the prospects of the process, but said that Azerbaijan’s attack on Armenia on Tuesday signaled that the situation remained tense.

“The latest skirmishes along the Armenian-Azerbaijani border prove that the situation there has not finally calmed down yet. The mission of the Russian peacekeepers [in Artsakh] as guarantors of the ceasefire and the safety of the civilian population is extremely important,” Putin said.

“The role of Russian diplomacy is undoubtedly growing in continuing efforts on settling disputes between Azerbaijan and Armenia, restoring economic ties in the South Caucasus and unblocking transport corridors,” added Putin.

“We have created a corresponding interstate commission at the level of deputy prime ministers, it is working, and in my opinion, prospects there are not bad. In fact, all countries of the region, including Russia, are interested in the settlement, a long-term settlement of the problem,” explained the Russian leader.

In Yerevan, Pashinyan revealed that Russia had made new proposals for the process of demarcation and delimitation of borders.

“The Russian Defense Ministry has made proposals on the preparatory stage of delimitation and demarcation,” Pashinyan said during his government session on Thursday. “These proposals are acceptable for Armenia.”

The prime minister said he has asked his newly-appointed defense minister, Suren Papikyan, “to clarify the details” of the proposals with his Russian counterpart. “Let’s try to implement the process within the framework of the proposals made by the Russian Federation,” Pashinyan said.

The details of the proposal have not been made public, nor did Pashinyan elaborate on the specifics during the government session.

On Wednesday, a day after Azerbaijan’s aggressive attack on Armenia’s eastern border, Pashinyan told lawmakers in parliament that Baku has been stalling the demarcation and delimitation process, which Yerevan sees as a needed step in stabilizing the region.

Before Putin’s remarks on Thursday, Russia’s Foreign Ministry also emphasized the need for the process to begin.

“The latest developments demonstrate the importance of this process, including the need for a relevant commission to work on the basis of proposals made by the Russian side,” Russian Foreign Ministry spokesperson Maria Zakharova said during her weekly press briefing in Moscow on Wednesday.