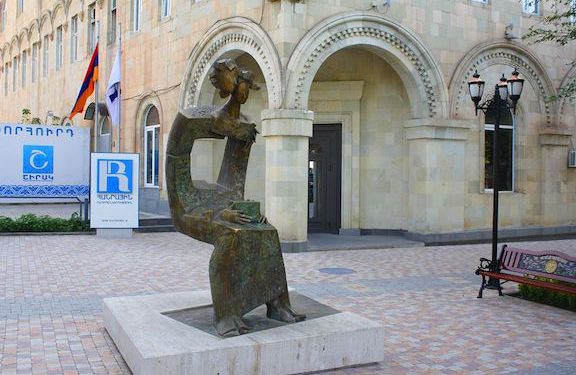 The headquarters of the Public Radio of Armenia, which turned 95 on Sept. 1

Having itself turned 113 this year, the management, editorial board and staff of Asbarez congratulates Public Radio of Armenia on its 95th anniversary.

From Soviet times to the present, the Public Radio of Armenia has been informing, educating and entertaining Armenians, with a strict vision of presenting facts, for more than nine decades.

The familiar “Yerevan is Speaking—Երեւանն է խօսում—has been the introduction listeners heard on September 1, 1926 when Armenia’s Public Radio went on the air for the time in what was then an experimental 15-minute program called “Voice of Yerevan,” featuring Armenian folk music with intermittent local news updates.

The news of Public Radio of Armenia was heralded by the “Soviet Armenia” newspaper, which on August 27, 1926 ran a headline touting, “The construction of the radio station in Yerevan has been completed. The station will start operating in five days.”

The launch of a radio station made it possible to use radio broadcasting as one of the most effective means of mass communication for informing and educating the public.

It wasn’t until June 15, 1927, that what was then called Armenia’s Republican Radio, began regular broadcasts, with Yerevan and the surrounding villages in its immediate vicinity being the areas to have access to its programming.

“As a result of efforts of a group of radio lovers, radio services became available in more than 25 villages in 1927, and in another 40 the following year,” said Public Radio of Armenia in an item published on Wednesday marking its anniversary.

Until 1929, actors and journalists from newspaper editorial departments were being invited to host radio programs. In December 1929 that all changed when the Public Radio of Armenia introduced its first hosts, Vergine Babayan and Suren Kananyan.

At the end of 1929 a radio committee consisting of 12 employees aired 2,160 hours of programming. In 1930s the audience was significantly expanded. New technical and creative capabilities were put into use.

During the post-war period the Republican radio opened a number of new editorial departments, extended the reach of its transmissions and in 1947 it started to operate a second channel (music and information), created new programs and projects, increased broadcasting hours and expanded its audience.

By 1962 the Public Radio of Armenia was heard in the entire territory of Armenia.