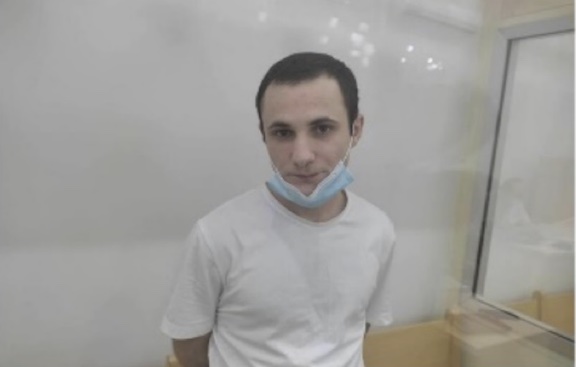 Russian citizen Eduard Dubakov has been held captive in Azerbaijan since January. Last month he was sentenced by an Azeri court to 10 years in prison for allegedly being a mercenary fighting for Armenia

During Azerbaijan’s 44-day military assault against Artsakh, Azerbaijani President Ilham Aliyev, with the help of his Big Brother, Turkey’s President Recep Tayyip Erdoğan, hired around 4000 paid mercenaries and ISIS terrorists from the Middle East and elsewhere. The Washington Post, reporting on October 13, 2020 about the repatriation of the bodies of 52 Syrian fighters, stated that the deployment of Syrian mercenaries as a fact. Among numerous reports from leading world media (BBC, the Guardian, the Independent), was the testimony from the U.S. journal Foreign Policy, confirming that at least 1,500 Syrian fighters had been deployed by Azerbaijan in Nagorno-Karabakh.

For his retaliation, Aliyev was anxious to demonstrate that the Armenian side was also hiring mercenaries to fight the war. Unable to locate any paid foreign militant within the Armenian army, Azerbaijani forces began looking for plausible “contenders” from the Armenian diaspora of several millions to manufacture their counterfeit accusation. Two of them were Lebanese-Armenian civilians Vicken Euljekjian and Maral Najarian, captured while driving to Shushi after the November 9 Agreement. Vicken Eujekjian was sentenced to 20 years imprisonment by the Baku Court for Grave Crimes on July 14.

Russian citizen Eduard Sergeyevich Dubakov is yet another victim of the Azerbaijani plot to accuse Armenia of deploying foreign terrorists. On July 22, Dubakov was charged at the Baku Court for Grave Crimes presided by Judge Samir Aliyev under Article 214-3.1 (terrorism, terrorist financing), Article 218.2 (participation in a criminal group (organization), and the group of organizers, leaders, or other representatives of organized groups), Article 318.2 (illegal crossing of the state border of the Republic of Azerbaijan). Dubakov had pleaded not guilty.

The 24-year-old Eduard Dubakov, whose father Sergey is from Artsakh, was born in the town of Labinsk, in Russia’s Krasnodar region. After finishing school, the youngster studied at the College of Law in Armavir.

Since his graduation, he worked in the business sector and online services. Eduard got married to a Russian woman in 2019, and they had a baby. In October 2019, the newlywed couple visited Armenia and Artsakh on holiday for the first and last time. Eduard’s father Sergey, who still lives in Labinsk with his Russian wife, has been campaigning tirelessly to establish his son’s innocence and secure his immediate release. After some persuading, Sergey agreed to give an exclusive interview about the events leading to his son, Eduard’s disappearance, and imprisonment in Baku.

JASMINE SEYMOUR: Sergey, when was the last time you spoke with Eduard before his disappearance?

SERGEY DUBAKOV: My last conversation with Eduard was on January 11. Eduard called me from Krasnodar. After that, we lost all contact with him. Months later, we found out from social media photos of tickets to Turkey and Baku and learned that he was arrested in Baku on January 18. Nobody from the Azerbaijani authorities informed us where our son was. Until now we are unable to establish how Eduard ended up in Azerbaijan? We are certain that Eduard did not plan to visit Azerbaijan via Turkey.

J.S.: We have witnessed kidnappings of Armenian civilians and soldiers by Azerbaijani forces since the Ceasefire in Artsakh. What are the potential reasons behind capturing Eduard outside Artsakh, in a third country?

S.D.: This is a tough question to answer. I can only assume that Eduard was captured only because he is of Armenian origin. I am of Armenian ethnicity, and my wife, Eduard’s mother is Russian. As I already said, Eduard visited Armenia and Artsakh in 2019 to see relatives and see the land of his ancestors. Possibly by sentencing him to 10 years, Azerbaijan intends to exercise political pressure both on Armenia and on Russia. In any case, I have absolutely no doubt, that Azerbaijani authorities have manufactured the trial against Eduard.

J.S.: Since the end of the second Artsakh war, Azerbaijani authorities have not complied with international laws regarding POWs or civilian hostages. Yet all detainees have the right for proper defense, as well as the right to communicate with their families. Have you been able so far to connect with Eduard by telephone or any other means?

S.D.: From time to time, Eduard has been allowed to call us, these have been very short phone calls, hardly two to three minutes, but we have no letter from him so far.

J.S.: Have you been able to contact the Red Cross in Russia about Eduard’s case?

S.D.: We have only recently requested the support of the Red Cross in Russia. We hope that they will assist with exchange of information, as well as letters to and from prison.

J.S.: As you mentioned before, Eduard had serious health issues last year. Are you concerned about his health in detention?

S.D.: In September 2020 Eduard was diagnosed with pneumothorax, a lung disease which needed urgent hospital care and he had continuous treatment from September to December 2020. In 2020 Eduard had three surgeries, connected with his condition, therefore, we are gravely concerned about his health in the Baku prison. From the court photographs, it is clear to us that he has lost a lot of weight. We have informed the Red Cross about our concerns for his health and his recent surgeries.

J.S.: Reportedly, Armenian captives have been often abused by Azerbaijani forces, endured physical and mental torture. What do you know about Eduard’s current detention conditions?

S.D.: On social networks we read that Eduard rejected all previous confessions declaring that the investigation was conducted under physical and mental torture. Therefore, it is probable that Eduard has been physically abused, so he needs medical examination independent from Azerbaijani authorities, and specialized medical assistance. Therefore, we have asked the Red Cross in Russia to interfere and to raise our concerns with the Red Cross in Baku.

J.S.: We understand that Eduard pleaded not guilty and is going to appeal, what evidence is there to prove his innocence and that he had no connection to the war or terrorism?

S.D.: During the second Artsakh war, Eduard had remained in the Russian Federation without interruption. The Russian Embassy in Baku provided all documents to the Baku Court for Grave Crimes that Eduard had not crossed the Russian border during the war. However, in the trial these documents were missing from the Court files. To the question where these documents were, the prosecution and the Court did not reply. Moreover, on September 20, 2020, Eduard had his first surgery for pneumothorax, and at the beginning of October he was discharged from the hospital. In the recovery period (October and November), Eduard was very weak and unable to conduct any physical activity or even to work. In December, he underwent two further surgeries. All medical documents were handed over to the court. Nevertheless, it is obvious that Azerbaijani authorities did not allow to enclose any document to testify Eduard’s innocence.

The conversation with Eduard’s father who is in faraway Labinsk, felt oddly close and left us more determined than ever to fight for young dad Eduard Dubakov’s innocence. We continue the struggle to release the Russian citizen Eduard Dubakov and ALL innocent POWs and civilian hostages held in Baku. Aliyev’s illegal and arrogant behaviour, in particular ongoing kidnappings, imprisonments and sham trials of ethnic Armenians MUST be stopped by all legal means to save innocent lives!

Jasmine Seymour runs a non-governmental organization British Armenian, which since the end of the war has been advancing the cause of Armenian POWs and captives. Sign the group’s petition.