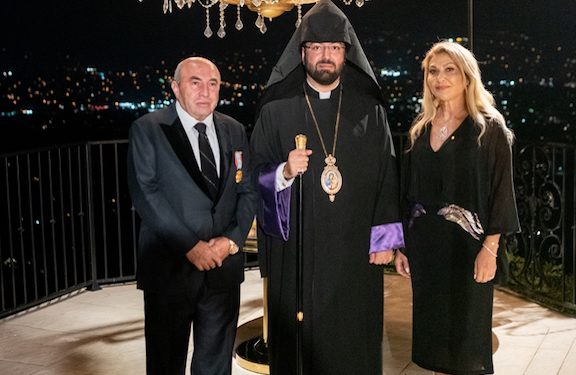 During a reception honoring Western Prelate Bishop Torkom Donoyan on August 6, hosted by Mr. & Mrs. Bedig and Maro Fermanian at their residence, the couple was awarded the “Knight of Cilicia” medal from His Holiness Aram I, Catholicos of the Great House of Cilicia.

With more than 100 community members in attendance, the evening was an opportunity for Bedig and Maro Fermanian to honor Prelate Donoyan.

The evening’s Master of Ceremonies, Rev. Karekin Bedourian, welcomed the guests, while Maro. Fermanian delivered welcoming remarks on behalf of her family and offered heartfelt well wishes to the Prelate.

In his remarks, Armenia’s Consul General to Los Angeles Ambassador Armen Baibourtian highlighted the importance of the Prelate’s mission, commended his devoted service, and conveyed sincere congratulation to the new, young Prelate.

Archpriest Vicken Vassilian stated that the event, in addition to being a reception in honor of the Prelate, had become an opportunity to come together and collectively enjoy the Prelate’s pastoral presence that evening and in our lives in general. He concluded by thanking the Fermanian family for their initiative to graciously host the evening, and invited the Prelate to deliver his message.

The Prelate first and foremost thanked the Fermanian family for the exceptional reception and the guests who accepted the host’s invitation and attended to congratulate his election as Prelate of the Western U.S.

Bishop Donoyan commended the enduring support of all toward the Western Prelacy and made a heartfelt plea for generous support to the Armenians of Lebanon experiencing severe and unprecedented hardships, adding that the once radiant and triumphant community of the past 100 years is suffering today due to vast and varied crises ravaging the country.

Following his remarks he presented Bedig and Maro Fermanian with the “Knight of Cilicia” medal.

On behalf of his family, Bedig Fermanian expressed deep appreciation to His Holiness Catholicos Aram I for the great honor, to the Prelate for accepting their invitation, and to all the guests for their inspiring and supportive presence.