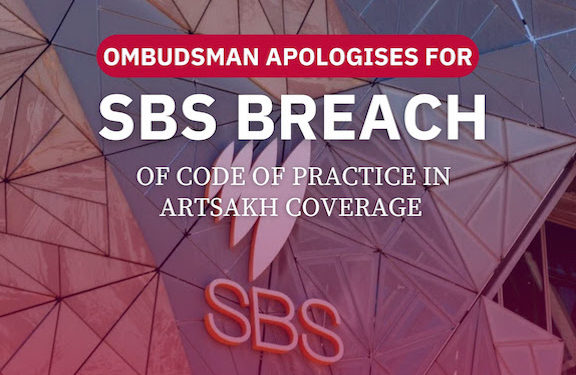 SYDNEY—One of Australian’s major broadcasting company, the SBS (Special Broadcasting Service), has apologized to the Armenian-Australian community after an independent Ombudsman determined that a report aired by the Australian network’s World News program concerning the 2020 Nagorno Karabakh War breached its Code of Practice, reported the Armenian National Committee of Australia (ANC-AU).

The three-minute segment in question, which was sourced from Al Jazeera and presented on 3, placed the blame of landmines left in the Azerbaijani-occupied territories of Artsakh squarely on the Armenian side. It failed the fundamental principles of media objectivity and the importance of providing the perspectives of all sides of a conflict, including perspectives from third parties, such as from independent international human rights organizations.

This sparked a strong response by the ANC-AU on behalf of the Armenian-Australian community, which was promptly referred to the SBS Ombudsman for review to determine if a breach had been committed by the multicultural public broadcaster.

SBS Ombudsman, Sally Begbie has responded with her findings, which evaluated the network’s editorial decision to air the story against Code 3.2 (Accuracy) and Code 3.3.1 (Balanced and impartial news and current affairs). She determined the segment was a breach of conduct.

Begbie acknowledged that the statement contained in the report, that landmines were “planted across seven districts of Nagorno Karabakh by soldiers from Armenia over nearly three decades” was inaccurate under the Code [3.2 (Accuracy)] and was “potentially misleading to an Australian news audience that is unlikely to have detailed knowledge of this conflict.”

“Having set up this inaccuracy, the report also did not meet the Code 3.3.1 (Balance) requirement to provide ‘a balanced and impartial presentation of issues and events, including through the provision of a range of relevant and material viewpoints,’” added Begbie.

The Ombudsman’s response also contained an apology on behalf of SBS, and affirmed that she has requested Director of News and Current Affairs, Ms Mandi Wicks, reminds her editorial team that they must “ensure that the news provisions of the SBS Code of Practice are met even when using material from one of SBS’s broadcast partners”.

“We thank SBS executives for sending our complaint through the proper channels for independent review, and are encouraged by the Ombudsman’s accurate finding that a breach was made at the expense of the long-suffering indigenous Armenians of the Republic of Artsakh,” said Kayserian.

“The Republic of Artsakh was grossly misrepresented in the Australian media during the war, which made the Azerbaijani dictatorship’s subsequent occupation of the self-determined Armenian state even more difficult to deal with by our community.”

“We trust this process, which has been positive, will serve as a reason for the media fraternity to become better informed on the Artsakh conflict and the injustices that continue to be committed against Armenians by the authoritarian leadership of their neo-Ottoman neighbours, Azerbaijan and Turkey, who appear to be determined to resurrect the genocidal ideology of Pan-Turkism today,” Kayserian added.

The Armenian National Committee of Australia thanked those community members who brought this issue to attention.