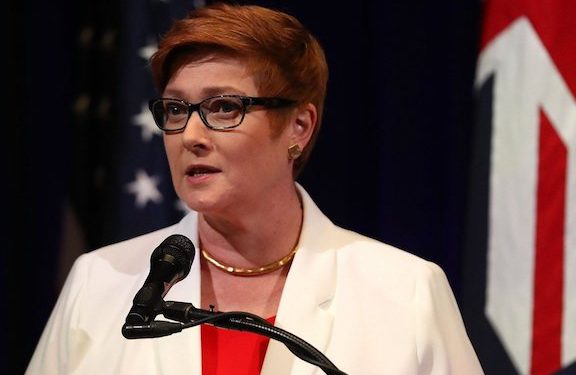 CANBERRA—Australian Senator Penny Wong questioned Foreign Minister Marise Payne and Department of Foreign Affairs & Trade (DFAT) officials if there was “an active decision not to” release a public statement condemning Azerbaijan’s continuing invasion of the sovereign territories of the Republic of Armenia, reported the Armenian National Committee of Australia.

In light of statements released by human rights organizations, the United States and the European Union, Wong questioned where the Australian Government was positioned on the issue during Senate Estimates in Parliament.

Senator Wong asked: “Freedom House issued a statement a couple of weeks ago, saying it was ‘deeply concerned by the reports of dehumanizing treatment and abuse, including torture, of Armenians captured and detained by Azerbaijan after the recent armed conflict’. The European Union has called for ‘the immediate and unconditional release of Armenian prisoners of war’. The US State Department issued a statement just a few days ago, also calling for release and reasserting the importance of observing obligations under international human rights law. Has the Australian government issued any similar statements?”

In response, First Assistant Secretary of DFAT John Geering confirmed the Government hasn’t issued a statement, but has “made representations to both governments, and those representations cover our concerns about the violations of the ceasefire”, before launching into another concerning episode of falsely equivocating the positions of invading force, Azerbaijan, and the invaded Armenia.

Geering said: “Since the Russian ceasefire arrangement, there have been multiple accusations by both sides about the border. As you’d be aware, there are issues around demarcation of the border which go back to how the Soviet republics were originally set up, and that has been an issue in itself. On both sides, there have been accusations. The more dramatic public ones, as you’d be aware, resulted, in one case, in the death of an Armenian soldier and the capture of six Armenian soldiers recently, and so on.”

“We have always said—and you would be aware of testimony we have put before this committee over a number of years—that our view is that the best organization to solve this is the OSCE Minsk Group, which is led by the French, Russians and Americans. They are the most active on this in terms of their declaratory policy. We have not sought active involvement in it. Therefore, we have recommended a less publicly strong stance on it,” Geering added.

When pressed on the issue by Wong, who said “standing up for the rights of these prisoners of war would be consistent with our position on international law”, Minister Payne appeared to correct her bureaucrat’s recommendation to remain silent on the injustices being faced by Armenia, hinting that her Government may consider a statement.

Wong also touched upon calls from the Australian Catholic Church Council of Bishops, the Uniting Church in Australia and NSW Ecumenical Council of 16 churches for the Government to condemn Azerbaijan’s desecration of Armenian churches in the occupied territories of the Republic of Artsakh.

She asked: “There have been representations from the Catholic Bishops Conference, the Uniting Church—my church—the NSW Ecumenical Council and others. What action, if any, have we taken around that?”

Geering responded with another edition of false equivalence.

“Yes, there was desecration. Yes, it was both sides. Yes, it was going on for a number of years. It was all covered,” he said.

“The actions we have taken—in our representations, we have raised this with both sides. Both sides claim this. In addition, in early December—I think it might have been 11 December—UNESCO proposed undertaking a fact-finding mission, a technical mission. We indicated support for that and our ambassador to UNESCO had been engaged in talking to representatives on that issue.”

Senator Eric Abetz earlier asked similar questions to DFAT, which ANC-AU Executive Director Haig Kayserian said represented a continuing amplification of pressure on the Australian Government to stand with the side of the just on issues concerning Armenia, Artsakh and Azerbaijan.

“The Department of Foreign Affairs & Trade is clearly continuing to publicly deflect Australia’s international responsibility to publicly call out the perpetrator of the blatant occupation of Armenia-proper and the desecration of religious and cultural sites in Artsakh because they are reluctant to become involved in the issue and disappoint the Islamist petro-dictatoship of Azerbaijan,” said Kayserian.

“However, we are thankful to Senator Penny Wong and Senator Eric Abetz, as their continued advocacy alongside countless Armenian-Australians has forced the Government to admit they are privately making representations and are now reviewing our appeal to go public in their condemnation of Azerbaijan in line with our allies in the United States, Europe and many other countries around the world,” Kayserian added.

Ankara Claims Pashinyan ‘May’ visit Antalya; Yerevan Says No Decision Has been Made