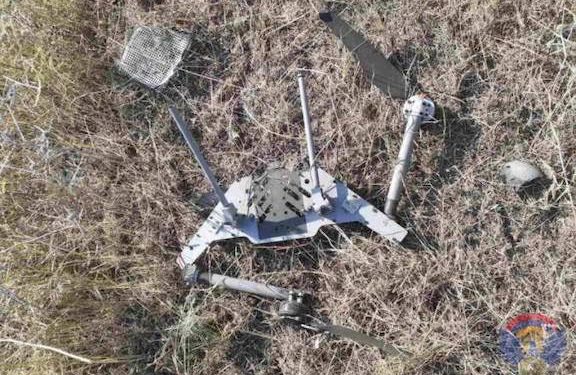 “On August 11, between 08:29 and 08:58 a.m. [local time]  Azerbaijan used strike UAVs targeting Defense Army positions,” said the Artsakh Defense Army statement, which added that there were no casualties as a result of the attack.

The Russian peacekeeping command was briefed on the details of the attack, said the defense army.

The Russian peacekeeping command in Artsakh has launched an investigation into a separate attack by Azerbaijan forces, which occurred on Monday near Shushi, which resulted in exchange of fire between Artsakh Defense Army soldiers and Azerbaijani military forces.

“On August 9, around 17:45 a shootout took place between armed formations of Nagorno Karabakh and the Azerbaijani armed forces near the Shushi,” the Russian Ministry of Defense said on Wednesday.

Artsakh’s Defense Army reported on Tuesday that that during Monday’s attack the Azerbaijani forces had fired three shells from SPG-9 anti-tank grenade launchers, in addition to small firearms.

Also on Wednesday, Artsakh’s State Emergency Service announced that three de-miners of the Humanitarian Center for De-mining were injured when a cluster bomb exploded during engineering-reconnaissance works in the Nor Shen village of Artsakh’s Martuni region.

According to the state agency, two de-miners were in satisfactory condition, while the third person was reported to be in serious, yet stable condition.

Armenia’s Human Rights Defender Arman Tatoyan said on Wednesday that his office has beein receiving reports from villages in Armenia’s Gegharkunik and Syunik Provinces, regarding Azerbaijani troops deployed near Armenian villages firing their weapons while intoxicated.

“In these cases tracer rounds were used to shoot in a manner visible to the civilian population, in an effort to terrorize them,” explained Tatoyan, adding that Azerbaijani forces blast loud music to disturb the residents, calling it “acts of hooliganism.”

“We have been receiving similar reports since December 2020 from residents of villages in the vicinity of where Azerbaijani troops are deployed,” said Tatoyan, explaining that the manner in which Azerbaijan has positioned its forces is a violation of international, especially since May 12 when Azerbaijani forces breached Armenia’s sovereign border and advanced their positions inside the Armenia proper.

Armenia Will Not Tolerate Occupation of Its Borders, Yerevan Tells Moscow