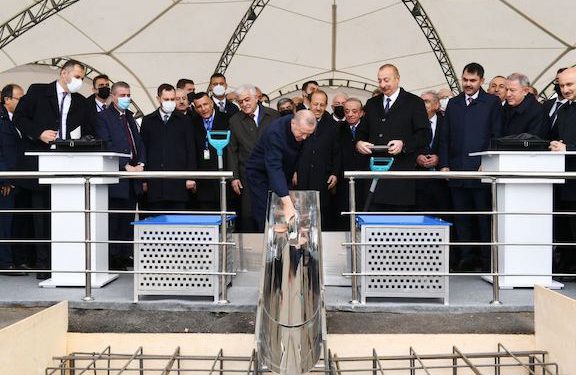 Azerbaijan promised that it would breach Armenia’s border through the new Horadiz-Jabrayil-Zangilan-Aghband highway, the foundations of which were laid on Tuesday at a ceremony attended by the presidents of Turkey and Azerbaijan, Recep Tayyip Erdogan and Ilham Aliyev.

“You are going to the Armenian border, aren’t you? Will you go further?” Erdogan asked the Azerbaijan’s state highway agency Saleh Mammadov, who responded by saying: “Yes, we will move to the other side. With God’s help, we will go all the way to Istanbul, to Europe,” reported the Turan news agency.

Erdogan traveled to the occupied Artsakh territories—his fifth visit since the end of the 44-Day War—to attend not only the ceremony for the highway that will realize Aliyev so-called “Zangezur Corridor” plan, but also another highway go through Artsakh’ Varanda (Fizuli) and Berdzor (Lachin) to Shushi. Erdogan and Aliyev also attended the opening ceremony of an airport in Varanda (Fizuli).

The 50-mile highway, with four to six lanes, which will connect to Shushi is a joint construction projects between Turkish and Azerbaijani companies and will have

“At present, Turkish companies employ 6,587 people. A total of 1,832 of them are Turkish citizens and 4,500 are Azerbaijanis. In total, 13,280 people work in companies operating in the Karabakh region,” said Mammadov, Azerbaijan’s highway director, according to Turan.

Azerbaijani authorities want the more that 76-mile long highway that cuts through Mekhakavan (Jebrayil) to the Armenia border, to reach all the way to Nakhichevan in what is being touted as the “Zangezur Corridor.”

In less than a year, Azerbaijan and Turkey have been pouring resources to construct transposition routes and hub in and around the occupied Artsakh territories.