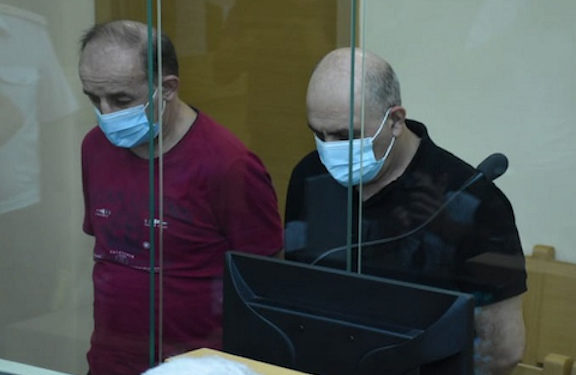 Lyudvik Mkrtchyan and Alyosha Khosrovyan in a sham trial in Azerbaijan

A sham trial of two Armenian prisoners of war, illegally being held in Azerbaijan, kicked off in a court in Baku, with state prosecutors charging them for allegedly torturing “Azerbaijani captives” during the Karabakh War in the 1990s.

Azerbaijan’s State Security Service and the country’s Prosecutor General’s Office issued a statement, claiming preliminary investigation of the criminal case against a total of 14 Armenian prisoners of war “who committed sabotage, terrorism and other crimes against Azerbaijani servicemen and civilians in the north-western region of Hadrut has been completed and sent to court.”

“First, all military and civilian Armenians illegally detained in Azerbaijan are prisoners of war. They were captured during the armed conflict, and now that conflict is not over,” Tatoyan said. “Furthermore, the Azerbaijani authorities are actually prosecuting the Armenian captives on the basis of their so-called ‘confessions.’”

“It is obvious that they are being held in such conditions in Azerbaijan obviously illegally, and the prosecution or trial of any of the captives, their detention, is a gross violation of the requirements of international humanitarian law, including the Third Geneva Convention,” explained Tatoyan.

“The anti-Armenian and hostile policies of the Azerbaijani authorities confirms the illegitimacy of criminal proceedings in general, making it unnecessary to even talk about the law. Under such conditions, the lives of prisoners and a number of other vital rights are clearly endangered,” said Tatoyan.

Armenia’s Human Rights Defender’s Office reported that, as evidenced from the videos and photos published by Azerbaijani sources Wednesday from the courtroom, prisoners Mkrtchyan and Khosrovyan were treated in a manner that overtly degraded human dignity. “The monitoring showed that these posts were made in order to cause additional mental suffering to the families of the captives and to create tension in the Armenian society,” said Tatoyan, who also explained that the Azerbaijani public hailed the trial, while some Azerbaijanis of social media called for their execution and torture.

“Therefore, the trials of Armenian prisoners held illegally in Azerbaijan completely contradict the principles of international law, grossly violate the rights of prisoners and their families, and politicize humanitarian issues,” Tatoyan said, noting that the Azerbaijani authorities do not report the real number of prisoners and calling on Baku to immediately release all POWs.