Azerbaijanis Fire at Armenian Positions in Gegharkunik and Ararat Provinces 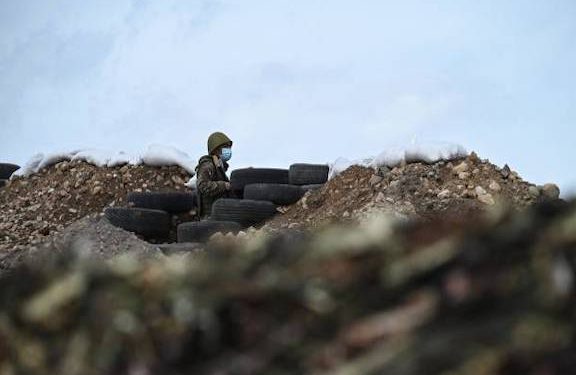 A soldier of Armenia's Armed Forces guards the border with Azerbaijan

Azerbaijani forces continued firing at Armenian positions in both the Gegharkunik and Ararat provinces on Monday, according to Armenia’s Defense Ministry.

Armenia’s Defense Ministry reported that countermeasures were taken by Armenian forces, adding that there were no casualties.

The office of Armenia’s Human Rights Defender provided more details about the incidents on Monday, saying that since early Monday the office had received alarming-calls from residents about Azerbaijani forces firing on the Sotk village of the Geghamasar community in the Gegharkunik province.

The Human Rights Defender’s office said that the shooting in Gegharkunuk was directed at GeoProGold mining company, a Russian-owned and operated mine in Sotk, forcing the evacuation of workers from the area.

“The fact that GeoProMining Gold was forced to stop operations overnight due to the shootings demonstrates that the Azerbaijani armed forces obstruct the company’s legal business activity, grossly violate the rights of employees, and pose a real threat to human life,” Armenia’s Human Rights Defender Arman Tatoyan said in a statement.

Tatoyan’s office also provided information about other shooting incidents around the mountain pastures of Verin Shorja village in the Gegharkunik Province, as well as the Yeraskh region in the Ararat Province where shots were fired on Monday at 11:30 a.m. and resumed at 3:30 p.m. local time.

The fact that the Azerbaijani shootings in the immediate vicinity of the mentioned communities of Gegharkunik and Ararat provinces of Armenia clearly prove that the motive of the Azerbaijani armed servicemen that are positioned near civilian communities on the borders of Armenia, especially in the sections of Gegharkunik, Syunik, and recently in Ararat provinces, is identical: Shootings, theft of livestock, creating obstacles to harvesting and posting a threat,” said Tatoyan.

“The described shootings clearly prove that the mere presence of the Azerbaijani armed forces in the vicinity of civilian communities of Armenia, and on the roads between the communities of Syunik province is primarily a violation of the right to life of residents of Republic of Armenia,” added Tatoyan. “Their actions violate Armenian citizens right to property, free movement, right to animal husbandry, right to earn an income, and other vital rights. They destroying peace and a normal way of life of civilians.”

Meanwhile, the Artsakh Human Rights Defender’s office was alerted to the capture of a resident of Machkalashen community of Martuni region.

“Our fact-finding efforts have revealed that the person is a resident of Machkalashen, born in 1989, who was breeding his cattle. While searching for his own animals, he found himself in the territory which is under the control of the Azerbaijani armed forces,” said the Artsakh Human Rights Defender Gegham Stepanyan in a Facebook post on Monday.

Hours later Stepanyan reported that the captured Artsakh resident was returned through mediation by the Russian peacekeeping forces.

“A medical examination revealed that he was beaten and inhumanely treated by the Armed Forces of Azerbaijan, as a result of which his right leg was injured and clothes were torn. The citizen is now in his own residence in his village,” Stepanyan said.

“Azerbaijan continues its aggressive behavior and does not miss an opportunity to torture and humiliate citizens,” Stepanyan added.

In a related matter, Armenia’s Defense Ministry reported that at 11 p.m. local time on Friday, Armenia’s air defense forces took action to prevent an attempt by an Azerbaijani drone to enter Armenia’s airspace in the southwestern portion of the Armenia-Azerbaijan border.