Azeris Instigate Brawl in Syunik, Fire Shots at Armenians in Artsakh and Gegharkunik 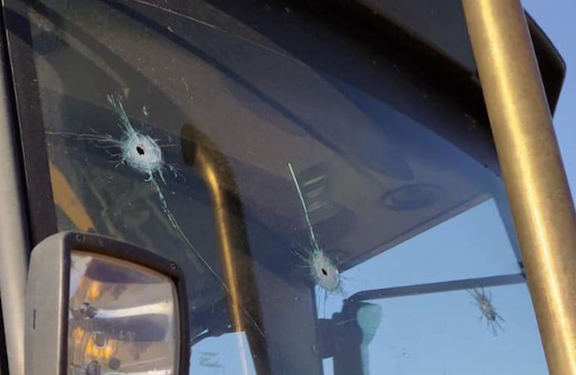 Azerbaijani forces continued to provoke violence against Armenians during three separate incidents on Thursday by firing shots at a civilian and a group of soldiers in Artsakh, discharging weapons in the Kut village in Armenia’s Gegharkunik Province and instigating a brawl near the Sev Lidj region of Syunik.

Near the Sev Lidj (Black Lake) region of Armenia’s Syunik Province, which has become the epicenter of a more than a week-long standoff at the border, Azerbaijani forces instigated a brawl with local Armenian residents that resulted in 11 people being injured.

Khoznavar residents confirmed the information to Azatutyun.am, adding that children and elderly persons living in the village were evacuated for security reasons.

Local shepherds said they were the first to notice the Azerbaijani servicemen while grazing cattle on nearby hills.

“We approached them, thinking that they are our guys,” one of them told Azatutyun’s Armenian Service. “We then saw that they are not wearing [Armenian] uniforms and not saying anything. One them signaled me to go away.”

The locals said that Khoznavar, which has about 400 inhabitants and is heavily dependent on animal husbandry, now risks losing most of its pastures.

Armenia’s Investigative Committee said on Friday that the Azerbaijani troops were forced to retreat from those pastures late on Thursday after brawling with Armenian soldiers guarding Khoznavar. Eleven Armenians were injured in that clash, the law-enforcement agency said, adding that it occurred on the Armenian side of the local border section.

Armenia’s Defense Ministry confirmed the incidents, saying it was caused by videos circulating in Armenian and Azerbaijani news sites and social media platforms. The ministry also said on Friday that the situation in Syunik remains largely unchanged but “stable.”

Artsakh officials have launched a criminal case into the shooting incident where Azerbaijani forces fired their weapons at a civilian and a group of servicemen of the Artsakh Defense Army near the village of Shosh. The civilian and the Artsakh servicemen were working at a military position when they came under fire.

The civilian who was operating a truck and the Artsakh soldiers survived by taking cover, while the truck was damaged.

In the Kut village in Armenia’s Gegharkunik Province, Azerbaijani forces who had breached Armenia’s border began firing shots to provoke the local residents.

“At around 3 p.m., several dozens shots were fired, presumably in the air, after which Armenian forces fired warning shots,” reported Armenia’s Defense Ministry. “The commander of the Azerbaijani troops contacted the Armenian unit commander, asked to cease fire, apologized and claimed that the shooting was a result of an accident.”

“The Armed Forces of the Republic of Armenia warn that a repeat of such incidents will be viewed as a deliberate attempt to provoke clashes and will lead to relevant actions by the Armenian side,” added the defense ministry.

Artsakh’s De-Occupation and Status Must be Prioritized, Says Foreign Ministry