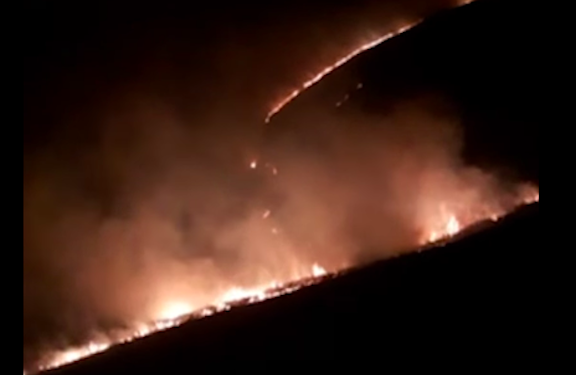 Azerbaijani forces killed an Armenian soldier in the Ararat Province, tortured a farmer in Artsakh and continued to deliberately set fire to fields in the Gegharkunik Province, various government agencies reported on Wednesday.

As a result of the indiscriminate shooting, Armenian Armed Forces soldier, junior sergeant Gegham Sahakyan, born in 1982, was killed.

The Defense Ministry in a statement strongly condemned the Azerbaijani attacks and warned that they will receive an “appropriate response.”

“The entire responsibility of the escalation of the situation falls on the military-political leadership of Azerbaijan,” the defense ministry said.

Artsakh’s Prosecutor General’s office reported on Wednesday that a farmer who had lost his direction and wound up in territories controlled by Azerbaijani forces on July 26 was captured by Azerbaijani soldiers and was tortured for several hours while in custody.

The 30-year-old farmer, a resident of Matchkalashen in Artsakh’s Martuni region, who suffers from mental illness, was out in the fields looking for his livestock when he “appeared under Azerbaijani military control after getting lost.” Hours later Russian peacekeepers were able to retrieve him.

A medical examination showed that the farmer suffered multiple bodily injuries, including on his head, face, chest and arms.

Artsakh prosecutors have filed a criminal case on charges of committing torture motivated by ethnic hatred.

Azerbaijan’s Prosecutor General Kamran Aliyev announced that it should be his office that initiates criminal cases in “areas where Russian peacekeepers are temporary deployed.”

“Fighting crime in the territory of the Republic of Artsakh is carried out by the law enforcement agencies of Artsakh, and unlike a number of countries that are members of the European Convention for the Protection of Human Rights and Fundamental Freedoms, we do it with the utmost diligence to comply with the provisions of the Convention and adherence to the rule of law,” the Artsakh Prosecutor General’s office said in a statement Wednesday in response to the Azerbaijani claims.

The Artsakh Prosecutor General’s office said that Azerbaijani law enforcement should work to prevent crimes, citing the Artsakh farmer who was tortured by Azerbaijani forces as an example.

“Since xenophobia and violations of rights of Armenians based on their ethnicity is openly being encouraged in that country [Azerbaijan], we cannot expect anything from them except inaction. And if the law enforcement system is unable to prevent such crimes, to prosecute its citizens and military forces who have committed crimes, then the only thing it can do is make statements,” said Artsakh’s Prosecutor General’s office.

Armenia’s Human Rights Defender Arman Tatoyan sounded the alarm on Wednesday that Azerbaijani forces continued to set ablaze not only fields but also hay reservers meant for use in the winter in the villages of Kut and Sotk in Armenia’s Gegharkunik Province.

Tatoyan warned that the wildfires, which started on Sunday and he called “arson,” continue to spread in the region.

“In many areas you can’t go anywhere near the fire because the area is under Azerbaijani military crosshairs, and whenever anyone approaches the are they [Azeis] start shooting,” Tatoyan explained.

“Firefighters are continuing to fight the blaze, with support of local residents. But equipment cannot be deployed in all affected areas because the fire is spreading in terrain which is difficult to access,” added Tatoyan.

“Weather conditions also are making the fire spread more rapidly. Studies show that firefighters were able to extinguish only the fire near Sotk in one day,” said Tatoyan who emphasized that deliberate setting of fires is depriving local villagers of their livelihood.

“Given the fact that the Azeri troops are located inside Armenian sovereign territory, in direct vicinity of villages, the fires pose a real and present danger to the life and property of the civilian population,” said Tatoyan.

‘Artsakh Must Become Priority for All Armenians,’ Artsakh Parliament Declares