Baku Has Given Azerbaijani Names to Several Cities in Syunik 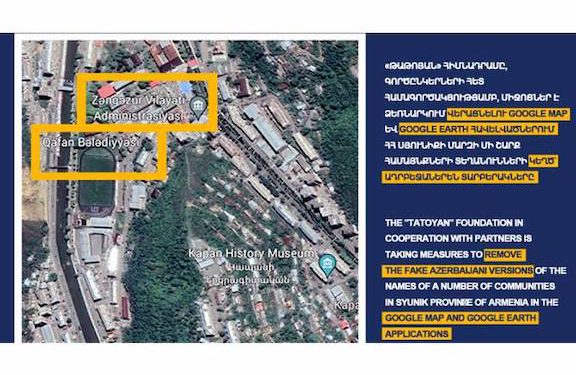 Tatoyan Foundation is joined by ANCA-WR to counter Azerbaijani lies

Armenia’s former Human Rights Defender Arman Tatoyan announced on Thursday evening that Azerbaijan, since its September 13 invasion of Armenia, has already begun changing names of cities in Armenia’s Syunik Province, adding Google, through its Maps and Earth applications has adopted these names as being part of Azerbaijan.

His eponymous foundation, in cooperation with the Armenian National Committee of America-Western Region has already contacted Google to counter the misinformation campaign. Tatoyan said that as a result of this effort, Google has already removed some of the fake names from its apps.

“If these steps do not result in corrections of all the misinformation, further measures will be undertaken with American Armenian lawyers to launch judicial proceedings with a demand to remove the Azerbaijani forgeries,” said Tatoyan.

The Tatoyan Foundation for Law and Justice has discovered that Google, within its Maps and Earth applications, has changed the names of locations of a number of communities in the Syunik Province of Armenia and being referred to as Azerbaijani names of places and in the Azerbaijani language.

The investigation was initiated after one of the residents of Sisian city sounded the alarm by notifying of these falsities to the Tatoyan foundation, Tatoyan said on social media and during a dinner hosted on Thursday by ANCA-WR, which invited Tatoyan to take part in its Grassroots Conference last week.

“Our investigation shows that schools, parks, squares, etc. have been renamed and given false or non-existent names. For example, the river ‘Vorotan’ is indicated by the Azerbaijani name ‘Bazarçay,’ the Sisian park is falsely named after the former president of Azerbaijan Heydar Aliyev, another park is named after Ataturk, the location of the Syunik province is identified only in Azerbaijani language as ‘Zəngəzur Vilayəti Administrasısıyı.’ They even tried to change the name of Sisian to ‘Qarakilise,’” Tatoyan said.

“It is apparent that these descriptions took place with the intervention of the Azerbaijani authorities. With such intervention, first of all, an attempt is being made to subject the people of Armenia and especially the residents of specific communities to psychological oppression,” Tatoyan added.

He said by swiftly changing the names of Armenian settlement, Azerbaijan is attempting to present to the world false information, specifically, that Syunik is Azerbaijani—an absolutely false thesis advanced by the Azerbaijani authorities.

“Finally, an attempt is also being made to legitimize the Azerbaijani attacks and criminal invasions on the sovereign territory of the Republic of Armenia,” explained Tatoyan. “A similar approach was observed with false renaming of locations in Meghri and Kapan.”