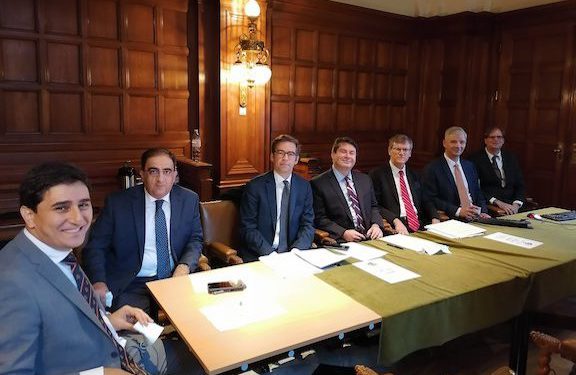 The team of lawyers and experts representing Armenia at the International Court of Justice in the Hague on Oct. 14

Azerbaijan has confirmed that displays depicting Armenian soldiers and helmets of Artsakh soldiers seized during the 44-Day War have been removed from the notoriously macabre “Trophy Park,” which was inaugurated in Baku last spring as a testament to Azerbaijan’s so-called success in the war.

Armenia’s representative to the International Court of Justice Yegishe Kirakosyan broke the news during an interview with Armenia’s public television.

The ICJ on Thursday began hearings on a case brought by Armenia, which is seeking provisional measures against Azerbaijan. Armenia seeks to prove that Azerbaijan is guided by a policy of ethnic cleansing and torture.

Kirakosyan said that the removal of exhibit items from the “Trophy Park” took place after Armenia filed the ICJ lawsuit, in which it seeking an order to force Azerbaijan to completely shutter the facility.

At the ICJ hearing on Thursday, Armenia’s team of lawyers and experts argued that Azerbaijan, according to the international humanitarian law and the November 9 trilateral statement, has been obliged to return all Armenian prisoners of war and civilians held, however, it still keeps holding the POWs and civilian captives. The rapporteurs mentioned both the unconfirmed captives and the 45 confirmed captives.

“The fact that Azerbaijan has detained these 45 persons is indisputable,” the rapporteur representing Armenia’s interests said, adding that their names and other information are presented in the documents, they are persons with clear names, faces and have families.

The rapporteur reminded that the special forces of Azerbaijan captured Armenian servicemen near Hin Tagher and Khtsaberd villages even in December 2020. It was emphasized that these two villages were not included in the areas which the Armenian troops needed to leave in accordance with the trilateral statement.

Numerous videos proving the killings and ill treatment of Armenian servicemen by the Azerbaijani servicemen have been presented to the court.

“Today you can hear that all these POWs are criminals and holding them in detention has no link with ethnic cleansing, meanwhile all evidence prove the ethnic cleansing,” the rapporteur said.

During the presentation, Armenia’s representatives also demonstrated the anti-Armenian rhetoric voiced by Azerbaijan’s president Ilham Aliyev, as evidence that xenophobic approaches of Azerbaijanis come straight from the top.

The International Court of Justice, the principal judicial organ of the United Nations, is holding public hearings over Armenia’s request to indicate provisional measures against Azerbaijan.

The hearings will last until Friday.