Baku’s Goal is to Pressure Yerevan to ‘Capitulate’ During Negotiations, Says Crisis Group 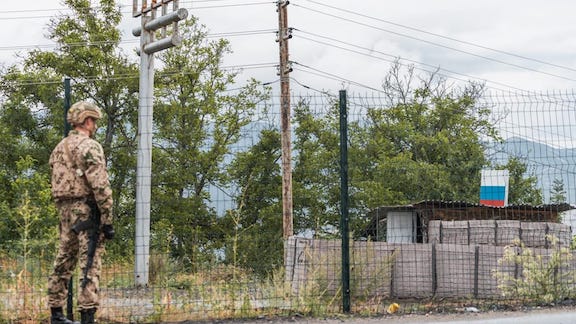 YEREVAN (Azatutyun.am)—By escalating the situation in and around Nagorno-Karabakh Azerbaijan pursues three goals that it wants to achieve either by force or the threat of force, which it hopes will pressure Armenia to capitulate in negotiations, an international think tank says in its latest report on the region.

In its report titled “Warding Off Renewed War in Nagorno-Karabakh” that was published this week the International Crisis Group goes on to list what it views as these three goals that have to do with the overland connection between Nagorno-Karabakh and Armenia known as the Lachin corridor, the withdrawal of Armenian troops from the region as well as a treaty with Armenia to end the conflict that would be to Azerbaijan’s advantage.

The report quotes an unnamed Azerbaijani official as saying that “the Armenian side is trying to delay the commissioning of the new road this year, thereby purposely delaying the handover of the city of Lachin and a number of villages to Azerbaijan.”

Azerbaijan’s second grievance, according to ICG experts, relates to what Baku says is Armenia’s failure to withdraw forces from Nagorno-Karabakh, as the ceasefire says it must do. “Yerevan says it has done so. The issue, it says, is Azerbaijan’s concern that Nagorno-Karabakh’s de facto authorities retain an armed force. Baku argues that this force is illegal, demanding that Russian peacekeepers disarm it, while Armenia and the de facto authorities say its disarmament was never part of the ceasefire deal,” the report says.

“Baku seized upon comments Armen Grigoryan, Armenia’s Security Council secretary, made in an interview in mid-July that Armenia would withdraw forces by September as evidence of its claims. Yerevan has since furiously tried to walk back words it says were taken out of context,” writes the ICG, noting that Armenian Prime Minister Nikol Pashinyan reiterated on August 4 that all Armenian armed forces have left Nagorno-Karabakh.

An Azerbaijani military official told the ICG that Baku will press ahead with operations until the area is fully demilitarized.

The report says that, thirdly, Baku appears keen to proceed to talks over a treaty that it hopes will end the conflict to its advantage. Although in April the Azerbaijani and Armenian leaders in Brussels declared their readiness to start talks on such an agreement, Azerbaijan has voiced frustration that subsequent diplomacy has moved too slowly, the authors of the report note.

An Azerbaijani official alleged that Armenian officials are purposely delaying talks. “They think that, by prolonging the negotiations, they can wait for the geopolitical situation to change in their favor,” the official quoted by the ICG said.

For their part, officials in Yerevan blame Baku, saying it is Azerbaijani officials that are “dragging their feet in EU-mediated talks and hoping to take advantage of the world’s focus on Russia’s war in Ukraine,” the authors of the report say.

“From a military standpoint, Armenia and de facto authorities in Nagorno-Karabakh view Baku’s seizure of Farukh (Parukh) in March, as well as positions held by the de facto Nagorno-Karabakh forces near the Lachin corridor and along the front lines in the entity’s north and north west, as an attempt to gain high ground and, thus, strategic advantage,” the ICG notes.

The authors of the report wonder whether Russian peacekeepers can deter Azerbaijan and enforce the ceasefire, noting that since early May, they have been conducting daily patrols on Sarybaba heights close to the Lachin corridor. “The patrols stopped a couple of days before the Azerbaijani advances, however, for reasons that are unclear,” the report says.

A senior de facto official in Stepanakert quoted by the ICG said the peacekeepers often feel powerless. “Everyone understands that Russia is weaker than ever before in the international arena,” the de facto representative said, according to the report.

“The clashes have once again highlighted the challenges faced by the Russian peacekeeping mission without a clear mandate for how it can engage beyond its monitoring role – a problem made worse by Russia’s loss of standing following its invasion of Ukraine,” the ICG writes.

In a 2021 report, the ICG called on the sides to hold talks on clarifying the peacekeepers’ role. “They appear increasingly unlikely to do so, particularly amid increasing criticism of the mission by both Armenia and Azerbaijan. Such frustration risks undermining the peacekeepers’ ability to carry out their existing mandate of observing the ceasefire in the conflict zone. If and when the time becomes ripe, international mediators must urge the sides to revisit this issue, which will likely come to a head in any case in 2025 when Baku and Yerevan must give their assent to the mission’s continuation,” the report says.

According to ICG experts, “most importantly, Western capitals and Moscow should try to ensure that their standoff over Ukraine does not bleed into mediation efforts in Nagorno-Karabakh.”

“Even distracted, Moscow pays more attention to Armenia and Azerbaijan than does Brussels or Washington. It remains the only country that has been willing to dispatch forces to the region and it remains a key trade partner of both countries. Working with Moscow, distasteful as it may be in European capitals, improves the odds of bringing peace to the South Caucasus,” the ICG says.

The group’s experts conclude that “concerted diplomacy by all outside actors might yet avert a return to war and keep nascent talks about an eventual peace settlement and new trade routes on track.”