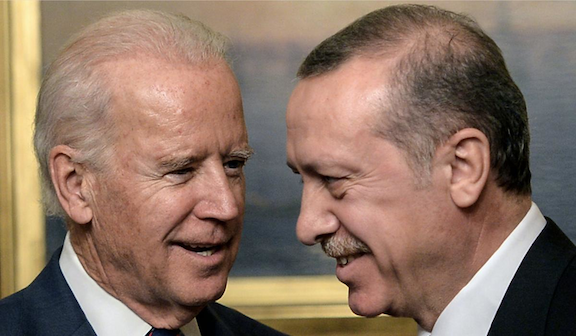 President Joe Biden will discuss the Nagorno-Karabakh issue when meets with Turkish President Recep Tayyip Erdogan next week on the margins of a NATO summit in Brussels, National Security Adviser Jake Sullivan told reporters on Monday.

Assistant Secretary of State for European and Eurasian Affairs Philip Reeker will visit Yerevan on Wednesday as part of his visit to the region, the State Department reported over the weekend.

Sullivan said Monday that Biden and Erdogan will also look at the “significant differences” between Washington and Ankara, Sullivan said.

Speaking at a White House briefing, Sullivan said the eastern Mediterranean, Syria, Iran, as well as the role that Turkey will play in Afghanistan as the United States withdraws from the country will be part of the “expansive agenda.”

In addition, the meeting, planned to take place on June 14, will also review their ties and look for ways on how the United States and Turkey deal with some of their “significant differences on values and human rights and other issues,” Sullivan said.

“President Biden knows Erdogan very well, the two men have spent a good amount of time together and they’re both, I think, looking forward to the opportunity, to really have a business like opportunity to review the full breadth of the relationship,” Sullivan said.

According to the State Department Reeker will travel to Tbilisi, Baku and Yerevan from June 6 to 13 to advance bilateral and regional priorities and to express U.S. support for democratic and economic development across the region.

In Armenia and Azerbaijan, Reeker will meet with government, civil society, and business leaders to discuss bilateral priorities and issues related to the Nagorno Karabakh conflict.