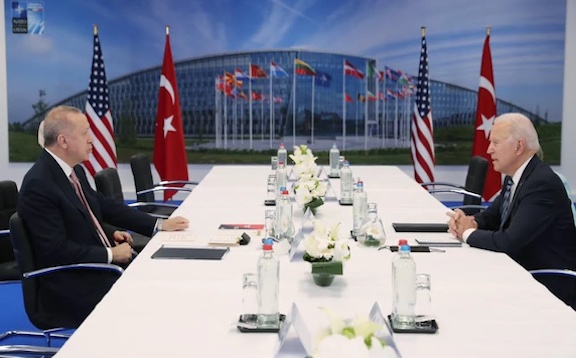 President Joe Biden met with his Turkish counterpart Recep Tayyip Erdogan on Monday at the NATO headquarters in Brussels where a summit of the organization had concluded.

This was the first meeting between the two leaders since Biden became president and recognized the Armenian Genocide in his April 24 statement. Reportedly that issue did not come up during the bi-lateral meeting.

Biden called his interaction with Erdogan “positive and productive” saying much of the meeting was one-on-one, according to CNN.

“We had detailed discussions about how to proceed on a number of issues. Our two countries have big agendas. Our teams are going to continue our discussions and I’m confident we’ll make real progress with Turkey and the United States,” Biden said during a news conference Monday evening, said CNN.

Erdogan called his meeting with Biden “fruitful and sincere,” adding, “We believe there is no problem that cannot be resolved in Turkey-US relations.”

At a press conference following the meeting, Erdogan said the “extensive talks” with Biden covered cooperation on regional issues.

There was no official confirmation whether that discussion had taken place and neither leader commented on it in their briefings to the press.