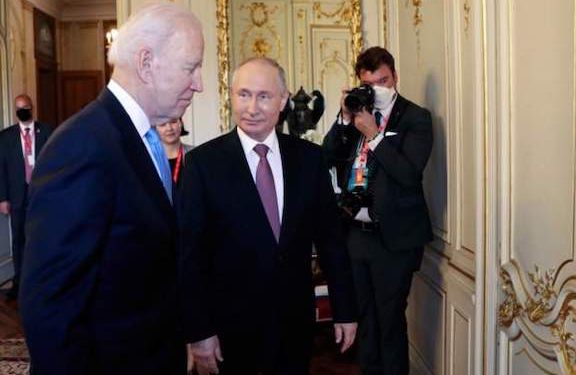 President Joe Biden and his Russian counterpart Vladimir Putin met in Geneva on Wednesday in was has been one of the most anticipated political meetings between world leaders in a long time.

The two leaders emerged from the meeting, which tool place at Villa La Grange, expressing satisfaction with the talks, but the issues that have divided the two countries were far from having been resolved.

On Tuesday evening, Putin foreign policy adviser Yuri Ushakov hinted that the two leaders would discuss the Nagorno-Karabakh conflict, among the other international issues on their agenda, among them the Middle East, Syria, Lebanon, the situation around the Iranian nuclear program, the settlement of the situation in Afghanistan and the Korean Peninsula, Ukraine and Belarus.

A joint announcement issued following the meeting mainly focused on reducing the risk of armed conflict and the threat of nuclear war.

“The recent extension of the New START Treaty exemplifies our commitment to nuclear arms control. Today, we reaffirm the principle that a nuclear war cannot be won and must never be fought,” the presidents said upon the conclusion of their meeting in Geneva.

“Consistent with these goals, the United States and Russia will embark together on an integrated bilateral Strategic Stability Dialogue in the near future that will be deliberate and robust. Through this Dialogue, we seek to lay the groundwork for future arms control and risk reduction measures,” added the statement.

Ahead of the summit, Swiss political officials joined representatives of various organizations and members of the Armenian community in Switzerland in front of Villa La Grange to demand that the two leaders condemn the overt aggression by Azerbaijan against Armenia and Artsakh, Armenpress reported on Wednesday.

The protesters spoke about the horrors of last fall’s Artsakh war, noting the human toll of the war on Artsakh, as well as the territories lost and the threat against Armenian cultural monuments there.

They added that Azerbaijan continues its aggression against the peoples of both Armenia and Artsakh, threatening their security, citing Azerbaijan’s breach of Armenia’s sovereign borders on May 12 and its advance into various Armenian provinces.

In an interview with Armenpress, music producer Ani Gasparyan, who is residing in Switzerland and participated in the protest, said that the members of the Swiss government have used the term ”genocide” used by Biden and noted that the international community expects further practical steps.

The demonstrators called on the two leaders to visit the monument dedicated to the 100th anniversary of the Armenian Genocide in Geneva, to not forget history to prevent its recurrence.

The Culture of Trust or Lack of It