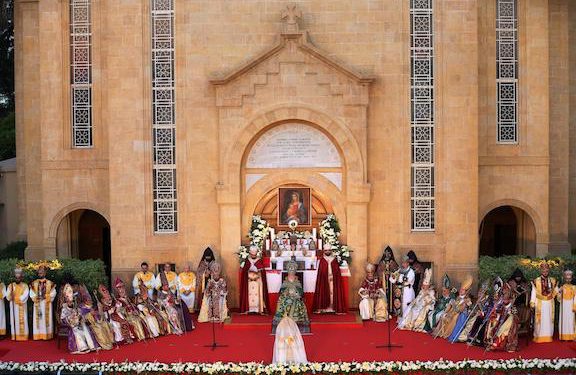 A scene from this year's Blessing of Holy Muron in Antelias

Since the fourth century the Armenian Apostolic Church has celebrated the blessing of the Holy Muron, which embodies the material presence of the Holy Spirit within our Church. This holy oil is consecrated once every seven years and serves various sacramental functions. During the liturgical service, Muron from the previous consecration is mixed with the new, forming an unbreakable generational linkage that dates back to the time of St. Gregory the Illuminator.

Following this tradition, a rich liturgical proceeding commenced before the St. Gregory Illuminator Cathedral in Antelias, Lebanon on Friday July, 1, 2022. Faithful Armenians from all over the world made the pilgrimage to be present for the special occasion. The Catholicos of the Armenian Church, Holy See of Cilicia, His Holiness Aram I presided over the enchanting ceremony and was accompanied by Syriac Patriarch Ignatius Aphrem II, as well as several bishops from the Cilician Brotherhood. Also in attendance were Bishops Mushegh Babayan and Vrtanes Aprahamyan from the Holy See of Etchmiadzin, and Archbishop Aram Ateshian from the Patriarchate of Constantinople, demonstrating the unity between the patriarchal sees of the Armenian Apostolic Church. Clergy from the Coptic Orthodox, Maronite, Greek Orthodox, Greek Catholic, Syriac Catholic and Armenian Catholic Churches were in attendance alongside statesmen and representatives of various organizations.

In the Bible, oil and the olive branch symbolically represent peace and blessing (cf. Genesis 8:11) as well as in the ordination of priests and coronation of kings (Leviticus 21:10). Christ too was consecrated with oil (cf. Luke 7:38). Holy Muron comprises over 40 different herbs and flowers that have distinct aromatic and healing attributes. Over the duration of a week, clergymen pray and chant psalms as the elements of this Holy Chrism are blended together, upon which the oil is placed in a cauldron upon the altar for a period of 40 days prior to its consecration. Once the Holy Muron is consecrated, it is then distributed to all of the prelacies of the Holy See of Cilicia that are located around the world, and thereby their respective parishes.

Holy Muron is used during the baptismal service within the Armenian Apostolic Church. It is poured from the dove-shaped reliquary into the baptismal waters symbolizing the dove that descended at Christ’s baptism (cf. Matthew 3:16; Mark 1:10; Luke 3:22; John 1:32), and also during the դրոշմ/troshm or confirmation portion of the liturgical service, where the officiating clergyman seals the newly baptized child’s forehead, eyes, ears, nostrils, mouth, hands, heart, back and feet, by dipping his thumb into his palm where he has poured a portion of the chrism. Each part of the body is accompanied by its own unique prayer containing a protective invocation upon the newly made member of the Church.

The Holy Muron is used in the ordination of priests and bishops, in the consecration of a catholicos, as well as for consecrating newly built cathedrals, altars and icons. At the blessing of the water on Christmas, the water is blessed through the pouring of Muron, alongside the Gospel and the Cross. Formerly it was used to anoint the sick as well. This sacrament is known as Վերջին Օծում or Հիւանդաց Կարգ, meaning Extreme Unction or Anointing of the Sick. Today, this tradition is primarily administered to clergymen who have passed away during the funeral service.

This Blessing of the Holy Muron was sponsored by the vice-chairman of the Western Prelacy’s National Committee, Mr. Mher Der Hovhannesian. The master of ceremonies, His Eminence Bishop Magar Ashekian invited bishops to present the sweet-smelling rose oil and balm, which was mixed into the new Muron over supplications. Furthermore, the Muron brought from Etchmiadzin was mixed with the new Muron as a symbol of the Armenian Apostolic Church’s oneness.

At the conclusion of the ceremony, His Holiness Aram I gave an inspiring sermon. In His address His Holiness said, “The blessing of the Muron is not just simply a liturgical service. It is God’s descent to earth and man’s ascent to heaven. The blessing of the Muron is a mysterious communication between God, with the inner working of divine-sent graces of the Holy Spirit. The blessing of the Holy Muron is the spiritual transfiguration and renewal of our people, along with our spiritual and national traditions, values and customs. The meaning of the Holy Chrism is deep and miraculous. God’s good works of creation are found in it, with the fusion of oil and 40 different flowers and seeds. Beyond its material substance, it is the ray of divine holiness in our sinful lives and source of heavenly light above our darkened skies.”

His Holiness also called upon the Muron-anointed sons and daughters of the Armenian Church to remain faithful to the Muron that has been confirmed upon their foreheads; to its message and call, for it is through it that we are united in will and strength. At the end of His address, His Holiness asked for the graces of the Holy Spirit to descend upon the faithful and beseeched that this Holy Chrism serve as an eternal source of heavenly goodness, spiritual renewal and national unity.

At the end of the service, His Holiness Aram I blessed all those present with the relic of the right hand of St. Gregory the Illuminator concluding the 13th consecration of Holy Muron in Antelias.