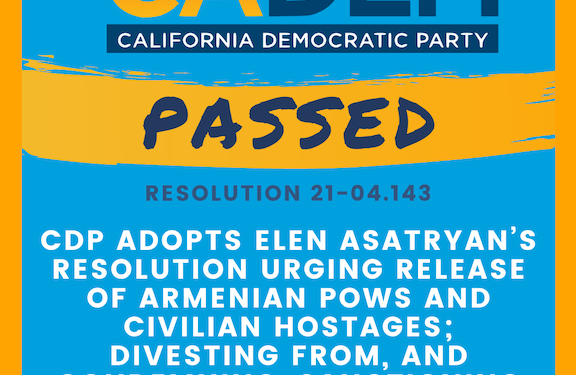 Calls for Divesting from, and Condemning, and Sanctioning Turkey and Azerbaijan As Part of its 2021 Top 13 Priorities

LOS ANGELES—The California Democratic Party on Sunday adopted, as part of its top 13 priorities coming out of its 2021 state convention, a resolution condemning Turkey and Azerbaijan for the war crimes they committed over the course of 44 days and after their attack on the Republic of Artsakh and Armenia, beginning  on September 27, 2020.

The resolution, introduced by LACDP Elected Member and DSCC Member Elen Asatryan, also urges Congress and the Biden Administration to sanction Turkey and Azerbaijan and demand that Azerbaijani authorities immediately release all Armenian Prisoners of War and captured civilians. Furthermore, it also calls on the California Public Employees’ Retirement System and the State Teachers’ Retirement System to divest all public employee retirement funds from investment vehicles issued by Turkey and Azerbaijan until Turkey recognizes the Armenian Genocide, and until the people of Artsakh are afforded the opportunity of self-determination on their indigenous lands. The measure passed during Sunday’s general floor session as part of a docket that drew overwhelming approval from delegates, with only nominal opposition on other resolutions, but none on record regarding resolution 21-04.143.

“With the passage of this resolution as part of its priorities, the California Democratic Party sent a clear message to Ankara, Baku, Washington, CALSTRS and CALPERS that its way past time to take immediate steps to ensure the safe return of Armenian POW’s and civilian hostages currently being held captive by Azerbaijan, and to not only sanction Turkey and Azerbaijan, but to divest from any and all public investments in Turkey and Azerbaijan.  To aid, trade, and invest is to be complicit in Turkey’s ongoing Genocide denial campaign and the war crimes Turkey and Azerbaijan continue to commit to this day. This is a humanitarian crisis that demands bold leadership and our immediate attention, and it is our moral responsibility to take a firm stand against human rights violations, to show solidarity in this moment of pain, and to amplify the voices of oppressed and displaced indigenous  communities against the oppressive forces,” emphasized Elen Asatryan.

“Thank you to the over 125 sponsors, delegates community organizations and members who helped rally support for this important resolution including Congressman Adam Schiff, Los Angeles Councilmember Paul Krekorian, DSCC Members Hans Johnson, Dr. Suzie Abajian, Kev Abazajian, Malcolm Johnson, The Armenian National Committee of America-WR, The Armenian Assembly of America, Southern California Armenian Democrats, the Glendale Teachers Association as well as the resolutions committee members and the over 900 delegates who ultimately voted to adopt it,” she added.

“It’s absolutely unacceptable that many months after the end of the war in Nagorno-Karabakh, hundreds of Armenian service members and civilians remain in Azerbaijani custody. Little is known of their condition, treatment or well-being,” said Congressman Adam Schiff who was listed as the first sponsor of the original resolution. “The United States must use every diplomatic lever to secure the immediate release of these detained POWs and civilians and impose consequences on Azerbaijan for their continued violations of human rights. I was proud to support Elen Asatryan’s work on this resolution calling on the Biden Administration and Congress to  condemn Turkey and Azerbaijan and demand that Azerbaijani authorities immediately release all Armenian POWS and captured civilians,” he added.

“Tenacity. Teamwork. Representation. These three core values of our Democratic club, East Area Progressive Democrats (EAPD), proved critical to winning approval from delegates of the California Democratic Party of its first-ever resolution to respect the human rights of Armenians. I am proud of the many EAPD members, led by Elen Asatryan and Malcolm Johnson, who worked hard and persevered through all obstacles to earn this victory for the long-ignored voices of Armenian people and overdue accountability for violations of law and conscience by Turkey and Azerbaijan. Now the largest state Democratic Party in the world’s foremost democracy bears witness to and officially stands up for human rights,” Hans Johnson, President, East Area Progressive Democrats and sponsor of the resolution.

Letters of support were sent to the committee members from over 125 organizations, leaders, delegates and fellow democrats urging passage of the resolution, including the Armenian National Committee of America – Western Region, Armenian Assembly of America, Southern California Armenian Democrats, Pan Armenian Council of the Western United States and its 24 regional and national Armenian-American religious, political and civil organizations, the Glendale Teachers Association, East Area Progressive Democrats, Los Angeles Councilmember Paul Krekorian, and others.

“With President Biden’s recognition of the Armenian Genocide, I am proud that the California Democratic Party acted to help stop  current Azeri and Turkish aims to kill Armenians and remove them from their ancestral, indigenous homelands. Elected officials and party leaders must ensure hostages and POWs are freed now,“ added Dr. Kev Abazajian, resolution sponsor, DSCC Member representing AD74 and Chair of Democrats of Greater Irvine.

“SCAD supports the California Democratic Party’s resolution for divestment of public retirement funds from Turkey and Azerbaijan, thus holding them accountable for their criminal and inhumane behavior during the 44 Day war and thereafter. Divestment of public funds from these undemocratic states is the only means we, as Californians, have of reducing the resources available to them in implementing their outsized, if not imperial, regional aspirations. As California Democrats, we are proud of our party for it steadfastly standing shoulder to shoulder with us,” emphasized Chair of the Southern California Armenian Democrats (SCAD), Leonard Manoukian.

“We applaud the California Democratic Party for adopting resolution urging the release of Armenian POWS and civilian hostages, divesting from and sanctioning Turkey and Azerbaijan as part of its 2021 Convention and priorities,” remarked ANCA-WR Executive Director Armen Sahakyan. “We thank all of  the authors and sponsors as well as the over 900 delegates who voted in favor of this resolution.”

“Kudos to Delegate Elen Asatryan and fellow CDP delegates from throughout California for demonstrating the moral fortitude in introducing and advocating for the adoption of this important and timely resolution. The CDP is clear and unequivocal in its position that Azerbaijan and Turkey must be held accountable for its inhumane treatment of Armenian POWs and captured civilians, and that divestment and sanctions on both authoritarian regimes is in order,” stated Armenian Assembly of America Western Region Director Mihran Toumajan.

This resolution comes on the heels of President Biden formally recognizing the Armenian Genocide as genocide and another unanimously-passed resolution by the LA County Democratic Party in October 2020 authored by Asatryan, which condemned Azerbaijan and Turkey for committing war crimes during their 2020 attacks on the Republic of Artsakh (Nagorno Karabakh) and Armenia and called on the U.S. to immediately impose sanctions and halt military aid to Azerbaijan and Turkey.

California is home to over one million Armenian Americans, a large majority of whom are directly impacted by the current threats and are descendants of Armenian Genocide survivors, who have been tirelessly advocating for global assistance and intervention as they witnessed the unimaginable sufferings of their family members overseas, inflicted by Turkey and Azerbaijan.

The California Democratic party is the dominant political party in the state.  Representing over 10.3 million democrats, it is also the largest democratic entity in the United States. The annual convention is a meeting of delegates of the party at state level to decide party policy, adopt rules governing the party’s organization, elect executive members, and select candidates running for office.

Names of 19 Armenians POWs, Tortured and Killed by Azerbaijan, Publicized