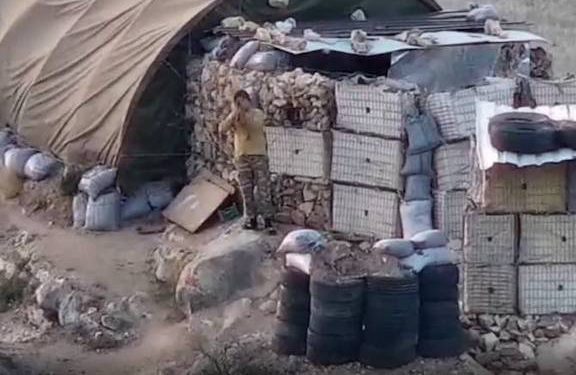 Artsakh security forces released surveillance video on Friday showing how an Azerbaijani serviceman is breaching the ceasefire and opening gunfire at Armenian positions, while laughing.

The National Security Service of Artsakh said in a statement that since the beginning of October Azerbaijani military forces have definitely changed course and specifically have begun targeting civilians in their more active and intentional ceasefire violations. The NSS said that the provocations started in Martakert, where a civilian was killed and have continued, with the latest attack that injured six Artsakh soldiers on Thursday evening (local time).

The Artsakh Defense Ministry said there were no injuries, adding that the incident was reported to the Russian peacekeeping command.

The video from Thursday’s shooting that injured six soldiers shows an Azerbaijani soldier firing an AK-74 assault rifle at Armenian positions while another Azeri soldier is hiding behind the barracks. After firing several rounds, the shooter can be seen laughing before resuming his attack.

The NSS explained that in the past Azerbaijani forces would fire shots as warnings, not aiming at Artsakh Defense Army personnel. “However, in recent days the direction of the shots has changed dramatically, with civilians being targeted,” the NSS. said.

“Yesterday, Azerbaijani troops deployed in a position near the Nor Shen community of Martuni region shelled a nearby Armenian position set up to protect the population of the village. The nearly point-blank range shots were fired so explicitly that surveillance cameras of the Armenian side caught it on video,” the NSS said, stressing that the images prove that the Artsakh Defense Army continues to adhere to the ceasefire agreement, whereas the Azerbaijani side is intentionally violating it.

Artsakh’s State Minister Artak Beglaryan on Friday said that three of the six injured soldiers have had surgery to treat their wounds.

The Artsakh Foreign Ministry, in a statement issued on Friday, said that Azerbaijan’s policy of terrorism is aimed at intimidating the Artsakh population so they will leave the country.

“In the recent days, Azerbaijan has been trying to artificially escalate the situation in the region, and this is taking place while high-level meetings are underway,” the Artsakh foreign ministry said, adding that Azerbaijan wants Armenians to leave Artsakh, through its intimidation.

“This policy is also an affront to Russia and the Russian peacekeeping mission,” said the Artsakh foreign ministry.

“We once again reiterate that Artsakh will not be threatened by such actions. The Armenians of Artsakh are determined to live in their historical Homeland and defend their sovereignty and dignity,” added the Artsakh foreign ministry.

Armenia’s Foreign Ministry on Friday condemned what it called “the gross violation” of the ceasefire by Azerbaijani forces. The statement pointed to the shooting Thursday that resulted in the injury of six soldiers, as well as the killing of Aram Tepants, a farmer who was shot on October 9 in the same vicinity.

Emphasizing that Thursday’s incident was the second serious attack that has resulted in civilian and military casualties.