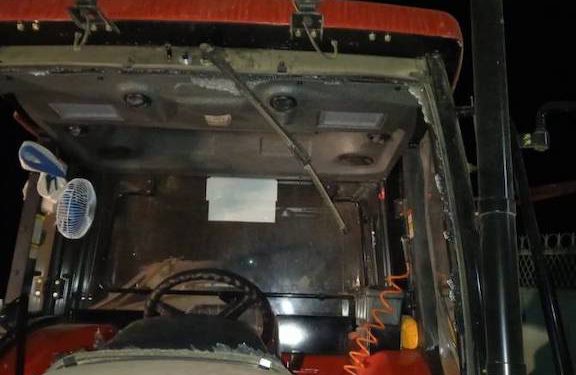 In several attacks in various parts of Artsakh on Monday, Azerbaijani forces targeted civilians in one instance shooting at farmers, in another provoking a driver on a local highway, with the shootings causing a vehicle and a fire truck to go up in flames. No casualties were reported.

A firefighting team responding to a fire in Artsakh came under Azerbaijani military gunfire.

A vehicle parked near a kindergarten in Karmir Shuka caught fire from the renewed Azerbaijani attack. The firefighters responding to the scene of the fire also came under gunfire. According to preliminary reports no one was injured from the shooting which lasted around 10 minutes, said the interior ministry.

“What actually happened is that the Azerbaijani servicemen, who are deployed in positions adjacent to the village of Karmir Shuka in the Martuni region in Artsakh, opened sporadic gunfire at the village, which resulted in a car owned by a civilian which was parked outside a kindergarten catching fire,” the Artsakh Defense Ministry explained.

At around 5 p.m. local time, Artsakh’s interior ministry officials were alerted to sporadic Azerbaijani gunfire in Askeran. The Azerbaijani forces were reportedly pointing at four civilians who were farming at a pomegranate orchard in the Nakhichevanik village in Askeran.

Russian peacekeeping forces mediate to end the barrage of fire from Azerbaijani forces, while residents of the area were evacuated, leaving behind their farming equipment, which was damaged as a result of the shooting.

In another incident, Azerbaijani forces threw rocks at an Armenian driver on the Goris-Stepanakert Highway near the Shushi exit.

The driver of the car, a 21-year-old resident of Vartenis, told the Kashatagh police department that his car was hit by Azerbaijanis near Shushi.

Artsakh authorities said that investigations are on the way.

“Such actions are a manifestation of the anti-Armenian and Nazi policy pursued at the state level in Azerbaijan, which once again proves that the ‘peace-loving’ statements of the Azerbaijani authorities have nothing to do with the real terrorist and expansionist goals of that country towards Artsakh, the Armenian people and the region,” said the Artsakh Foreign Ministry in a statement.

“Ever since the cessation of hostilities, Azerbaijan’s aggressive behavior has been in gross violation of all the agreements reached, the norms of international law and principles of humanity and has an aim to intimidate the people of the Republic of Artsakh and disrupt the activities of the Russian peacekeeping mission,” added the statement.

“We consider it necessary to emphasize once again that with such steps Azerbaijan cannot shake the determination of our people to live in Artsakh, for which any status within Azerbaijan is absolutely unacceptable,” said the foreign ministry. “We will continue to develop and strengthen our homeland.”