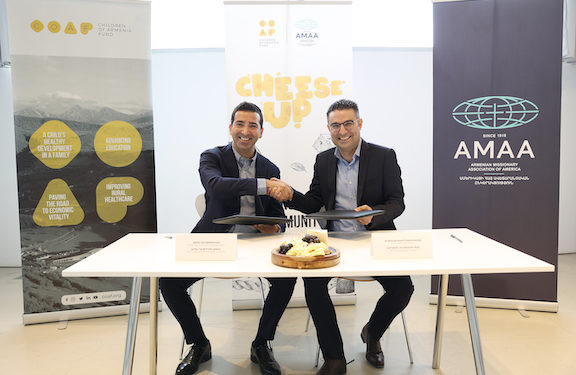 YEREVAN—Children of Armenia Fund signed a four-year Memorandum of Understanding with the Armenian Missionary Association of America on September 17 to upgrade dairy production in six communities of the Lori region. By improving the pasture and livestock feed production across the region, this project will enhance the quality of raw milk and establish a demand for high-quality dairy products, ultimately impacting regional price dynamics and increasing the revenue of rural milk producers.

The event was held at the COAF SMART Center and attended by representatives from the Strategic Development Agency (SDA) and World Wide Fund For Nature (WWF), Caritas Armenia, AMCOR, as well as mayors of the beneficiary communities.

In a constant endeavor to improve the livelihoods of rural children, COAF has integrated Economic Development in its multilayered effort to create the right socio-economic environment for collective progress. As part of its Economic Development program, COAF has earlier launched a project in partnership with the United Nations Development Program. This program has resulted in developing a raspberry value chain in the Lori region by providing berry seedlings, establishing a drip irrigation system, and training over 50 households in berry production and cultivation.

Drawing on successes achieved in this project, COAF is eager to replicate this model for Armenia’s underdeveloped dairy value chain. In joining forces with the AMAA, COAF will be able to make a sustainable impact on Lori’s dairy market by optimizing four existing businesses through innovative and renewable technologies in milk processing. Simultaneously, two new dairy production businesses will be established that will benefit from the enhanced reproductive performance of dairy animals. The improved quality of milk will allow the new businesses to improve livestock production, produce high-quality cheese, and compete in local and international markets.

As part of the project’s capacity-building programs, local farmers will be trained for artificial insemination and cultivation of corn, alfalfa, and sainfoin. Per partners’ estimates, more than 70 job opportunities will be created throughout the project.

The Children of Armenia Fund is a non-profit, non-governmental organization that employs community-led approaches to improve the quality of life in rural Armenia, with a particular focus on children and youth. COAF’s core development areas are education, healthcare, social services, and economic development. COAF launched its programs in 2004, starting in one village and expanding to 64 villages in the Armavir, Aragatsotn, Lori, Gegharkunik, Shirak, and Tavush regions, impacting more than 107,000 beneficiaries.

Since 2015, COAF has developed and implemented its signature SMART Initiative. COAF SMART is designed to advance generations of rural Armenians through cutting-edge education, focused both on innovation and capacity-building. The first COAF SMART Center was inaugurated on May 27, 2018, near the village of Debet, Lori Region, and will be replicated in communities throughout Armenia.

The Armenian Missionary Association of America was founded on June 7, 1918 in Worcester, Massachusetts. Immediately after the devastating earthquake of 1988 in Armenia, the AMAA worked tirelessly to relieve the pain of those affected by the earthquake by providing food, clothing, medicine, and medical equipment.

In 1991, after the independence of Armenia and following the registration of the AMAA in Armenia, the new headquarters opened in Yerevan. Currently the AMAA operates from dozens of offices in various regions of the Republic of Armenia and Artsakh with more than 475 employees. The mission of AMAA Armenia is the promotion of the Armenian people’s welfare. The organization strives to help them improve their lives by providing financial, medical, social, educational, spiritual, cultural and employment assistance. Since 1991 AMAA Armenia reached out to more than 100 000 beneficiaries in difficult life situations. The AMAA has a special focus on child welfare and education, however, it also maintains the integrity and quality of its services to other parts of society.