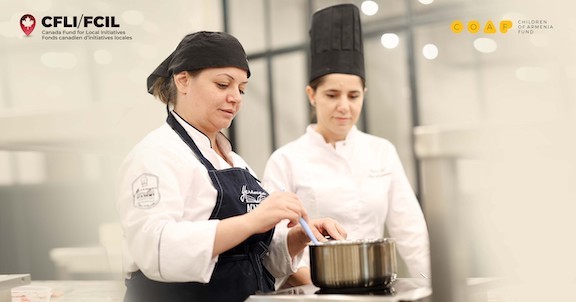 YEREVAN—The Children of Armenia Fund has received a contribution from the Canada Fund for Local Initiatives to provide 30 women with employment opportunities in the hospitality industry of Armenia’s Lori Province. The project, entitled “Empowering Vulnerable Women through Job-Oriented Skills Development and Employment Services in the Hospitality Sector in Lori Region of Armenia,” kicked off on September 1 and will conclude on February 28, 2023.

The Project seeks to promote gender equality and economic empowerment for women in the workforce in Lori by addressing disadvantages in the labor market, and filling skill gaps to meet the hospitality industry’s needs. This, in turn, will boost the sector’s regional competitiveness and economic development.

Thirty women, aged 18 and above, will receive intensive training in culinary arts, restaurant management, and servicing, delivered by the Yeremyan Academy of Culinary Arts and Hospitality. Seven women-owned partner institutions in Lori— including: Debed Life, Chamich, Angar, Kaghni, Tezh Ler, Tumanyan Development Foundation and both the COAF Concept Hotel and Conference Center—have guaranteed to hire graduates of the training program: six chefs, six restaurant managers and 18 waiters. In addition, the Marriott Armenia Hotel, The Concept Hotel by COAF and the COAF SMART Conference Center are committed to hosting post-training internships.

According to the Statistical Committee of the Republic of Armenia (Armstat), Lori Province ranked among the highest with poor households and second highest nationwide with its level of migration in 2020. Moreover, the International Labor Organization recently reported Armenia as having the highest unemployment rate of women among post-Soviet countries, with women constituting 60 percent of the unemployed population. The Project will be implemented in the rural areas of Lori, where these issues are deeply rooted, alongside gender inequality, gender stereotypes, domestic violence, and other related phenomena.

COAF will manage the CFLI project, which totals about $38,740, and act as a co-financing organization, with contributions that amount to 27 percent of the total costs.

As a leading rural development foundation with a mission to advance communities in Armenia through innovative programs, COAF has brought about dramatic results in terms of empowering individuals, and especially women (who make up 71% of COAF staff), to define their own futures and become active participants in their local communities. With the CFLI funding in place, COAF will increase its efforts by providing 30 disadvantaged women and their families with opportunities to maximize their potential, gain financial independence and increase their household incomes, thus fostering gender equality and social inclusion in Lori’s burgeoning hospitality industry.

The Children of Armenia Fund is a non-profit, non-governmental organization that employs community-led approaches aimed at improving the quality of life in rural Armenia, with a particular focus on children and youth. COAF’s target development areas are education, healthcare, social and economic development. COAF launched its programs in 2004, starting in one village and expanding to 66 villages in Armavir, Aragatsotn, Lori, Gegharkunik, Shirak, and Tavush regions, impacting more than 107,000 beneficiaries.

The Canada Fund for Local Initiatives provides modest funding for small-scale, high-impact projects in more than 120 countries eligible for official development assistance (ODA). The CFLI has an annual programming budget of $26.8 million, with projects averaging $31,000 each. Projects are planned and implemented mainly by local organizations and are selected and approved by the relevant Canadian Embassy or High Commission.