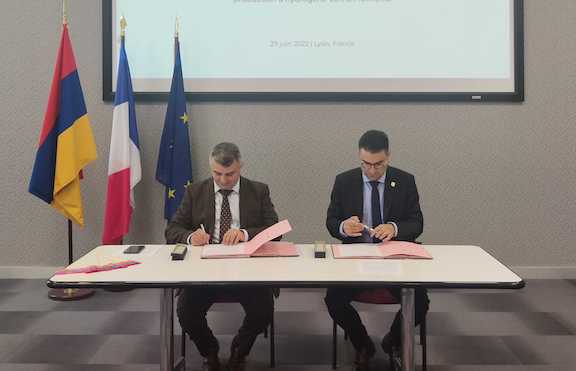 Representatives of COAF and Solges-Energy signing the partnership agreement

LYON, France—Children of Armenia Fund and HyGreenCo, a subsidiary of the French group Solges-Energy, have signed a partnership agreement aimed at the construction of the first industrial demonstrator of Smart Grid in Armenia, integrating the entire chain production of green hydrogen.

The signing of the agreement took place in the presence of Deputy Minister of Territorial Administration and Infrastructure of the Republic of Armenia Vatché Terteryan, Ambassador of France in Armenia Anne Louyot, and Ambassador of Armenia in France Hasmik Tolmajyan,

This industrial demonstrator, developed in partnership with French research institutes and laboratories, will originally supply clean electricity to the SMART Center created by COAF in Debet, Armenia, and eventually to the Debet community. A solar farm will produce the electrical energy that will power a French technology electrolyser for the production of green hydrogen.

The hydrogen produced will be stored to be used either directly by supplying a hydrogen station with charging terminals, or to be retransformed into electricity using a hydrogen fuel cell, which is also based on French technology, and thus ensure that the end users are served in an uninterrupted way and free of any CO2 emission.

This innovative process of hybrid renewable energy production solves the problem of intermittency related to solar or wind sources. Carried out in the form of an industrial demonstrator, it will enable further development of this technology and conceive its large-scale expansion in Armenia.

This partnership between French and Armenian stakeholders will on one hand allow French companies to develop their know-how in clean energy— and particularly hydrogen—on a national scale, and on the other hand Armenia to be among the leaders in achieving low carbon goals and developing a thriving green economy.

This project is one of the first achievements of the “Ambitions: France-Armenia” Roadmap signed between France and Armenia on December 9, 2021, with the specific aim to increase cooperation between the two countries in the fields of sustainable development and new technologies.

“Armenia represents an extraordinary opportunity to develop the best of French technology in the field of renewable energies and to create a real industrial sector in collaboration with our partner companies and equipment manufacturers in France,” said Armen Sédéfian, President of the Solges-Energy group.

“We wish to actively contribute to the process undertaken by Armenia to develop its green economy and make it the 1st Smart & Green Nation in the region thanks to French industrial excellence. As a result, Armenia can very soon become a great technological showcase for the neighboring markets of the Eurasian economic area, as well as those of Iran and the Gulf countries,” Sédéfian added.

“We are very happy about the outcome of this partnership with the Solges-Energy group, as this renewable energy production project empowers us to add the last brick of innovation and sustainable development in the foundation of our SMART Center in Debet,” said Korioun Khatchadourian. “Since its inception COAF has in fact been entirely dedicated to a sustainable development approach, which has inspired the entirety of the projects we have carried out to this date. It is also yet another way for us to contribute to the image of an Armenia resolutely committed to the global cause of reducing greenhouse gases.”

The SOLGES-ENERGY Group was created in France by Armen Sédéfian with the aim to develop innovative, hybrid and controllable renewable energy production infrastructures with an entire ecosystem of French partner companies, institutes and research centers. The HyGreenCo subsidiary was created for a particular purpose of implementing projects which integrate the entire hydrogen chain in France and abroad, more specifically in Armenia. The SOLGES-ENERGY group acts as a global operator of all its operations, being solely responsible for their conception, development, production, financing and operation.