COAF Soiree Raises Over $535,000 for Smart Village Initiative in Armenia 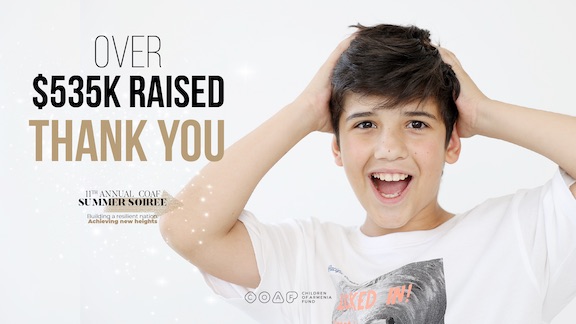 This year’s event raised over $535,000, surpassing the set goal of $350,000. Funds will go towards COAF’s ongoing efforts aimed at revitalizing rural Armenia, providing children and families opportunities to advance themselves and achieve their full potential.

Debet, where the COAF SMART Center is located, is in Lori, one of Armenia’s most impoverished regions, with over 70 percent of the population categorized as socially vulnerable. COAF is prioritizing cutting-edge, sustainable solutions to strengthen Debet’s education, healthcare, and social services systems, in addition to critical infrastructure development and economic stimulation.

These initiatives form the backbone of COAF’s transformation of Debet into a SMART Village, where community-focused and comprehensive approaches to development will raise the quality of life, make the Lori region globally competitive, and help stem the tide of emigration.

“The Debet community is facing the very real threat of depopulation within the next 20 years. The grim reality is that nobody else in Armenia is investing the same energy in our neglected rural communities as we are. Now more than ever, we need to act as a collective and fight for the revival of our overlooked areas,” stated COAF Managing Director Korioun Khatchadourian during his address.

The event was hosted by Araksya Karapetyan of Good Day L.A. on FOX 11 Los Angeles, COAF Head of Development Haig Boyadjian, and world-famous auctioneer Gabriel Butu. The program featured spectacular performances by “Universal Dance Studio” and “Voices of Artsakh,” along with stunning jewelry pieces graciously donated by TACORI for the Soiree’s auction.

From building regional health centers to providing homes for displaced families from Artsakh, COAF is committed to strengthening and supporting the Homeland. The organization’s supporters have consistently demonstrated the will of the Armenian people to collectively build a strong, high-achieving nation, built on resilience and innovation.

The full recording of the 11th Annual COAF Summer Soiree can be viewed free of charge online, where you may also contribute to empowering rural Armenian youth through the organization’s ongoing education, health, social and economic programs in over 60 villages.