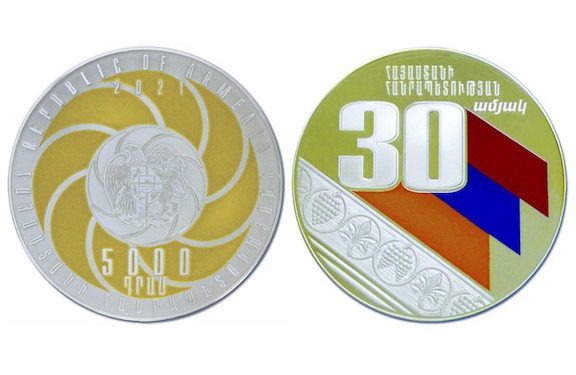 With the 30th anniversary of Armenia’s Independence next week, a new commemorative coin marking the milestone has been issued.

On September 21, 1991 Armenia declared independence, preserving the symbols of the state—the coat of arms, flag and National Anthem. Armenia’s national currency, the dram, went into circulation on November 22, 1993.

The formation of an independent democratic state helped preserve and strengthen national self-consciousness and traditions, and the Armenian Apostolic Church became more prevalent in the lives of Armenians. One of the most important achievements of the period of independence is certainly establishment of Armenia’s Armed Forces.

Today Armenia is a member of the United Nations, the Commonwealth of Independent States, the Council of Europe, the World Trade Organization, the Eurasian Economic Union, and more than 40 other international organizations.

Collector coins are made of precious metals and are issued to present to the society the national, international, historical and cultural, spiritual and other values of the country, to immortalize these values in the metal and to meet the demands of the numismatic market.

Like any other currency the collector coins have face value which makes them the means of payment. However, the face value of these coins is much lower that their cost price which includes the cost of the precious metal used for manufacturing of the coin, mintage and other expenses. Low face value and high cost price allow these coins to be considered as the items of collection and not the means of payment used in money circulation. The collector coins have also the sale price set by the Central Bank of Armenia.

As the items of collection the collector coins are issued in very restricted quantities and are not reissued.

Numismatists, collectors and all interested persons can buy the Armenian collector coins in the sales room located in the Central Bank building.