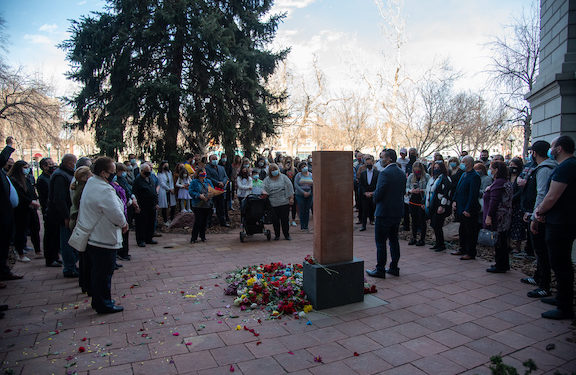 On April 23, both chambers of the Colorado General Assembly unanimously passed Senate Joint Resolution (SJR) 21-017, sponsored by State Senator Dominick Moreno and State House Majority leader Daneya Esgar, in commemoration of the Armenian Genocide. This year’s annual genocide resolution, which was first introduced in 2002, noted the ongoing consequences of the Armenian Genocide, including Turkey-Azerbaijan’s recent aggression, occupation, ethnic cleansing in Artsakh, as well as Azerbaijan’s refusal to release Armenian POWs or allow UNESCO monitoring of churches.

“While Pres. Biden’s recognition of the Armenian Genocide was a historic event for the entire world, Colorado’s vibrant Armenian community yet again set a national precedent by successfully urging their state legislature to not only commemorate the Armenian Genocide but also recognize its ongoing consequences in Artsakh,” remarked Armenian National Committee of America Western Region chair Nora Hovsepian, Esq. “The Armenian Genocide is not just a historical fact, it’s an ongoing process, which Colorado has been a global leader in acknowledging in the past by erecting a replica Djulfa khachkar erased by Azerbaijan on the grounds of its State Capitol,” continued Hovsepian. “In addition to the resolution, Colorado’s top three elected leaders – the Governor and two US Senators – also spoke on the Armenian Genocide, which is also a tribute to our local grassroots’ unwavering efforts in keeping Armenian-American priorities on Colorado’s political agenda.”

In a video address to Colorado’s Armenian community, Governor Jared Polis commemorated the Armenian Genocide while acknowledging fresh trauma experienced by the Armenian community due to the recent Artsakh war. In particular, Gov. Polis noted that “we know this past year Armenians have endured additional tragedies in defense of their sovereignty, culture, rich history, and we want to let all Armenians in Colorado and across the world know that we stand with you.”

“Colorado’s Armenian community is immensely grateful to our state legislature, governor, and federal officials for once again standing with our community and doing the right thing,” remarked Armenians of Colorado (AOC) President Byuzand Yeremyan. “As we continue to build our community through cultural and educational programs, including the Armenian School, AOC looks forward to continuing its partnership with local, regional, and national organizations to raise educational awareness about the history and modern ramifications of the Armenian Genocide,” concluded Yeremyan.

SJR 21-017 highlighted the recent aggression on Artsakh as an ongoing consequence of the impunity for Ottoman Turkey’s 1915-1923 extermination of two million Armenians, Assyrians, Greeks, Yazidis and other indigenous minorities. Most significantly, Colorado’s legislature unanimously called out Turkey-Azerbaijan’s recent aggression on Artsakh and raised the issue of Armenian POWs and threatened cultural sites.

The resolution noted that “Turkey’s ongoing denial of the Armenian Genocide paved the way for another tragedy in late 2020, when Turkey-aided Azerbaijan invaded the Republic of Artsakh, a region of the Armenian homeland, in an onslaught that despite a ceasefire announcement continues to this day through Azerbaijan’s unwillingness to release nearly 200 Armenian Prisoners of War, forbiddance of the return of Armenian refugees to Hadrut and other occupied regions of Artsakh; and refusal of international missions to monitor the nearly 1,500 antique and medieval Armenian cultural sites that have recently come under Azerbaijan’s control.”

In his floor remarks, primary Senate sponsor of SJR 21-017 Sen. Moreno stated “this is something that is dearly personal to the Armenian community especially with events over the summer when there was graffiti and damage done to the Armenian khachkar memorial. We should continue each year to recognize this tragic event… This is particularly painful for the Armenian community because they recently lost control of territories to Azerbaijan.” Sen. Moreno reiterated the importance of continuing “acknowledging the pain and suffering [Armenians] have gone through both in contemporary times and the past.”

State Senator Faith Winter, who spoke in support of the resolution, noted that “history can be uncomfortable” but that “recognizing the Genocide that happened nearly 100 years ago is important to understand history” because “when history is uncomfortable when it is hard for us to admit what happened is when we probably grow the most.” In particular, Sen. Winter recounted her visit to Turkey, where she met young people who were willing to discuss and learn from the Armenian Genocide.

In her House remarks, primary sponsor of SCR 21-017 State Representative Daneya Esgar, who is also the House Majority Leader, noted that “The Armenian community is feeling very vulnerable because of losing access to territory and their sacred sites, so I feel that it is important to stand with them.” Both Moreno and Esgar recounted their planting of a memorial tree at the Yerevan Genocide Memorial at Tsitsernakaberd during an ANCA-WR-sponsored legislative study trip in 2019. Both mentioned that even though the legislative body typically refrains from commenting on current international events, it is important to stand with the Armenian community. They also acknowledged the presence of two local Armenian-American leaders: AOC President Byuzand Yeremyan and ANCA-WR’s Simon Maghakyan.

Following Majority Leader Esgar’s remarks, Speaker Pro Tempore Adrienne Benavidez spoke in staunch support of the resolution’s language calling out Turkey-Azerbaijan’s on Artsakh. According to Benavidez, “this is not just a historical situation… this is continuing and we, as members of this body, have a duty to speak out against atrocities like this.” The Speaker Pro Tempore further noted that “We have to make it clear that we support Armenians and send a clear message to Azerbaijan and their supporters like Turkey.” Benavidez also referenced the lead oped of The Denver Post’s Sunday edition, in which former State Representative Cole Wist and Simon Maghakyan had argued that Pres. Biden should recognize both the past and the present of the Armenian Genocide.

Several other lawmakers also spoke in strong support of the resolution. State Representative Jennifer Bacon noted, in part, that “humanity in general has a deep sense of wanting to belong.” State Representatives Dafna Michaelson Jenet and Emily Sirota recalled their joints efforts in championing last year’s Armenian Genocide and Holocaust education law. Michaelson Jenet stated: “There is often a question: if the Armenian Genocide had been stopped, could have the Holocaust been stopped to?” In her remarks, Sirota stated that “I am so grateful to have had the opportunity to carry the bill to ensure that our students are educated on the Holocaust, the Armenian Genocide, to know that this is part of the ongoing work that we do.” State Representative Iman Jodah noted that “standing in with support with Armenian brothers and sisters is how we put an end [to genocide].”

On April 24, at 5pm, Colorado’s Armenian community and supporters gathered at the Colorado State Capitol Armenian Memorial Garden and Khachkar, which was vandalized last year, for the commemoration. Present dignitaries and supporters included former Colorado State Representative Cole Wist, Regional Transportation District (RTD) Board Member and former State Representative Paul Rosenthal, who is the only Colorado official to have visited the Republic of Artsakh, and members of Colorado’s Turkish-American community who officially recognize the Armenian Genocide.

In his remarks, Rep. Wist stated that “This day belongs to the Armenian people, it belongs to this community, my heart is with all of you. Le’s think of those who are not with us, and of those in the broader Armenian family. Today is for all of you. Love you all.”

At the end of the commemoration, community leaders announced upcoming plans for restoring the khachkar, and summarized the recent support the community received: from President Biden to Governor Polis, from Colorado’s legislature to the Congressional delegation. The brief program was concluded by a violin performance of Groong and Adanayi Voghb by Nina Fronjian.

Armenians of Colorado, Inc. (AOC) was established in June 1980 as a 501(c)3 non-profit cultural organization. Its purpose is to create a cohesive Armenian community and to further the understanding of Armenian history, culture, language, customs, and heritage. AOC actively supports issues and concerns of the Armenian-American community in Colorado as well as those identified within the Armenian Diaspora throughout the world.