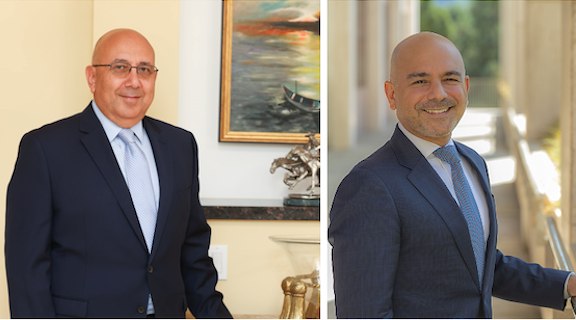 Dr. Esrailian outlined the activities of the Promise Institute for Human Rights at University of California Los Angeles School of Law.

The Promise Institute gained a reputation of being one of the leading centers of human rights education, research, and advocacy in the United States. It is also acknowledged for generating new thinking on human rights. Dr. Esrailian also presented the activities of the Promise Armenian Institute (PAI) at UCLA that is designed to be a hub for topnotch research and teaching on Armenian Studies as well as for coordinating interdisciplinary research and public impact programs across UCLA, and with Armenia and the Armenian Diaspora.

Esrailian also briefed the ambassador about UCLA’s Operation Armenia, which is a coordinated effort of a dedicated interdisciplinary team providing medical disaster relief and long-term humanitarian aid and infrastructure support to Artsakh and Armenia.

Esrailian and Baibourtian discussed further efforts for enhancing learning and advancing legal research on the Armenian Genocide in its post-recognition period in the United States.

Baibourtian expressed his profound appreciation to Dr. Esrailian for his incessant impactful efforts aimed at recognition of the Armenian Genocide, promoting the Armenian culture, relief endeavors in Armenia and Artsakh, in particular launching of the UCLA’s Operation Armenia.

In 2015, Esrailian was announced as a manager and producer for Kirk Kerkorian’s production company, which was set up to raise awareness about the Armenian genocide—Survival Pictures. He produced “The Promise” with Mike Medavoy. The epic film stars Golden Globe Award nominee Oscar Isaac and Academy Award and Golden Globe Award winner Christian Bale. In 2017, he produced Intent To Destroy with Joe Berlinger and Chip Rosenbloom. In 2019, Intent To Destroy was nominated for an Emmy for Outstanding Historical Documentary.

Dr. Esrailian is on the Motion Picture & Television Fund (MPTF) Board of Governors. Among others, he joined the Board of Directors of the Hammer Museum in 2012, which is an important art museum and cultural center in Los Angeles. Dr. Esrailian is also on the Board of Directors of the X Prize Foundation, a non-profit organization that designs and manages public competitions intended to encourage technological development to the benefit of mankind.