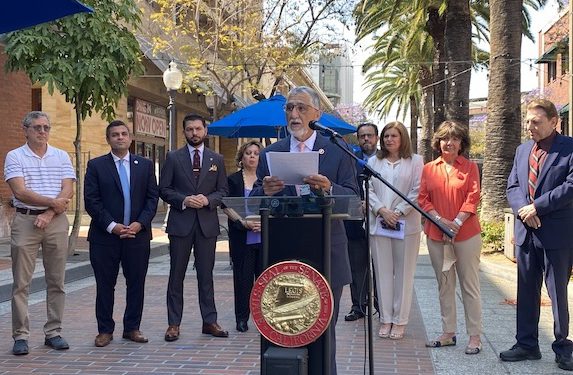 The recent passage of a State Senate measure allowing local agencies to divest from Turkey has elevated the importance of the matter for the California State Teachers’ Retirement System, which has taken concrete steps to begin the process of divesting its interests from Turkey. This was announced by State Senator Anthony Portantino, who spearheaded the measure in the Senate, during a press conference on Wednesday morning on the Artsakh Street Promenade in Glendale.

Portantino was joined at the event by Glendale city officials and representatives of community organizations that backed the effort in thanking CalSTRS for the decisive action, which will mean that the organization will be removed from the original bill, placing added pressure on the California State Public Employees’ Retirement System to follow suit.

Portantino announced that CalSTRS has placed restrictions on the three Turkish state-owned banks, which will prevent them from being included in the CalSTRS portfolio, through either internal management or through ownership by an external manager. “As a direct result of this policy change, one of CalSTRS’ external managers is selling an investment in one of these banks,” explained Portantino.

CalSTRS has also directed each of its external managers who have Turkish state-owned entities in their portfolios to re-evaluate each of these investments to assess their compliance with CalSTRS’ Environment, Social, and Governance (ESG) policy.

“CalSTRS is conducting additional risk evaluation of a Turkish-issued treasury that is currently the only investment issued or controlled by the Government of Turkey that they hold internally. We will continue to monitor this evaluation and its outcome but due to the significant steps they have taken, we are confident that they will continue to do the right thing,” added Portantino.

“I was pleased to join an impressive group of speakers and organizations on Artsakh Avenue today to announce the three divestment steps CalSTRS is taking to curb investment in Turkey.  Proud that SB 457, jointly authored with Senator Wilk, is making a difference. I extend my deep appreciation to STRS for this important, appropriate and positive decision,” said Portantino.

“It is unconscionable that state and school employees of Armenian decent or not have a portion of their hard earned salary invested in a country that denies the Armenian Genocide and fails to take responsibility for its actions.  Historians and human rights organizations are watching and we can now add CalSTRS to the list of organizations doing the right thing,”  added Portantino.

In his remarks, Portantino highlighted not only Turkey’s continued denial of the Armenian Genocide, but also its active efforts in aiding Azerbaijan during last fall’s war, saying that California residents should not be forced to pay for Turkey’s human rights violations, especially Armenian state employees, whose investment into the pension system, which funds the country that murdered their ancestors.

He also presented messages from Senate Republican Leader Scott Wilk, who introduced the measure, SB457, along with Portantino and Senator Andreas Borgeas, who has been a strong proponent of the effort.

The event was moderated by Glendale City Councilmember Ardashes “Ardy” Kassakhian, who in his remarks highlighted the importance of the step taken by CalSTRS and commended Portantino and other lawmakers who have been on the forefront of the Turkey Divestment movement. He also emphasized the role that the Armenian Youth Federation and Armenian Student Associations have played in initiated the movement on University of California campuses, all of whose student governments individually voted to divest from Turkey.

“For far too long the costs and consequences of the Armenian Genocide have been borne by the victims of this international crime against all of humanity,” said Armenian National Committee of America-Western Region Executive Director Armen Sahakyan, who was one of the organizational representatives speaking at the event.

“We thank Senator Anthony Portantino and all co-authors of SB457 for their leadership on this critical issue, and applaud CalSTRS on this meaningful step of restricting Turkish holdings. Especially in light of President Biden’s recognition of the Armenian Genocide and Turkey’s ongoing aggressive posturing against Armenia and Artsakh, we call on CalPERS to follow the lead of CalSTRS in disallowing California public funds from being used in funding an unrepentant, genocide denialist government of Turkey,” added Sahakyan.

Glendale Mayor Paula Devine welcomed Portantino, the guests and the community to Glendale and expressed her support for the initiative. Also president were Glendale City Councilmembers Vrej Agajanian and Daniel Brotman.