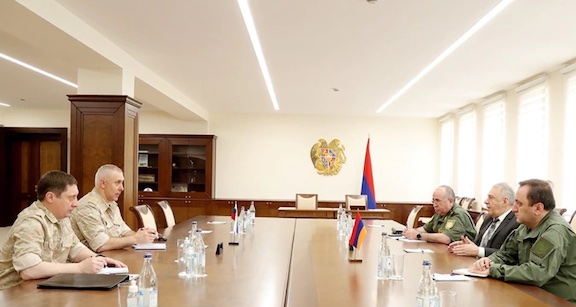 YEREVAN (Azatutyun.am)—Defense Minister Vagharshak Harutiunyan met on Tuesday with the commander of Russian peacekeeping forces deployed in Nagorno-Karabakh to discuss the continuing military standoff on Armenia’s border with Azerbaijan.

Lieutenant-General Rustam Muradov participated in a series of talks held by Armenian and Azerbaijani military officials after Azerbaijani troops reportedly crossed several sections of the border two weeks ago. The talks proved fruitless, with Armenia continuing to accuse Azerbaijan of occupying Armenian territory.

According to the Armenian Defense Ministry, Harutiunyan told Muradov that Baku must pull back its forces “without preconditions.”

A ministry statement said the two men discussed “possible variants of resolving” the border crisis. It did not elaborate.

The Armenian newspaper “Hraparak” reported that Muradov arrived in Yerevan after holding talks with Azerbaijani officials in Baku on Monday. The Russian general made no public statements in either capital.

The epicenter of the standoff is a mountainous area about 10 kilometers north of Goris, a town in Armenia’s Syunik province. The Armenian military sent reinforcements there after Azerbaijani forces advanced several kilometers towards the village of Verishen.

Narek Ordian, a Verishen resident and local council member, claimed that they tried to advance further but were pushed back by Armenian soldiers late last week.

The area is close to the so-called Lachin corridor connecting Armenia to Karabakh. The corridor is controlled by the Russian peacekeepers led by Muradov.

The continuing standoff has led the Armenian government to formally ask Russia and the Collective Security Treaty Organization (CSTO) for military support. Moscow has responded by calling for a delimitation and demarcation of the border and offering to act as a mediator in that process.

Senior lawmakers representing Armenia’s ruling My Step bloc on Tuesday dismissed suggestions that Russia and the Russian-led military bloc have failed to provide the support requested by Yerevan.

“I don’t think that Armenia’s allies have not fulfilled or will not fulfill their duties,” parliament speaker Ararat Mirzoyan said during a session of the National Assembly. “The CSTO, for example, still has procedures and mechanisms [for doing that] and we are continuing to talk to the Russian Federation. So I think we need to stay optimistic.”

Unlike Russia, the United States, France and several other countries have publicly called on Azerbaijan to withdraw from Armenia’s border areas. “Azerbaijani armed forces have crossed into Armenian territory,” French President Emmanuel Macron said on May 13.

Baku denies violating Armenia’s territorial integrity, saying that its troops simply took up new positions on the Azerbaijani side of the frontier.