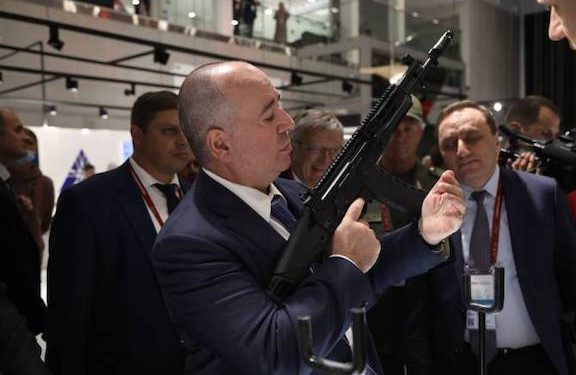 Armenia’s Defense Minister Arshak Karapetyan said that one of his top priorities is to ensure that Armenia acquires new and high-quality weapons, adding that he anticipated that Armenia’s strategic ally, Russia, will play an important role in advancing this effort.

Speaking on the margins of the “Army 2021” military-industrial exhibition in Moscow on Tuesday, Karapetyan also said his other two top priorities are to boost domestic production of arms and to ensure to eliminate middlemen from his ministry and arms producers, Armenpress reported.

“I can say I never heard the word ‘no’ here,” said Karapetyan referring to his talks about weapons acquisitions from Moscow during the exhibition.

“We will take practical steps to develop our cooperation with Russia. We plan to obtain new and high quality arms. We have refused to buy old weapons. That has been our policy. It’s better to have less but higher quality arms, ensuring that they will operate when needed,” added Karapetyan.

The defense minister said that Russia also supported Armenia’s domestic arms production ambitions, adding there are potentials for creating joint ventures with Russia, adding that if his three priorities are realized, Armenia will “definitely have a new, modernized army in line with the 21st century and will be able to withstand any challenges.’’

President Ilham Aliyev of Azerbaijan complained last week about Russia’s intentions to provide weapons to Armenia. In an interview with CNN Turk, he said that Russia’s arms supply to Armenia was disruptive.

Reforms and upgrading Armenia’s Armed Forces is and remains one of the key priorities for the Armenian government, Prime Minister Nikol Pashinyan said during a presentation of his government’s action plan at Armenia’s parliament on Tuesday.

“I must note that some forces are trying to present our army reform agenda as evidence of our plan or decision to adopt an aggressive policy and start war,” Pashinyan told parliament. “This farthest from the truth because Armenia, like any peace-loving state, will develop and upgrade its Armed Forces not to sow aggression, but to defend itself from aggression and to protect its own sovereignty.”

“Armenia has no intention to conquer territories, start war,” added Pashinyan saying that his government’s goal is to carry out ongoing reforms in the Armed Forces that would ensure the fulfillment of its mission as outlined in Armenia’s Constitution.

Defense Minister Karapetyan was on hand for the “Army 2021” exhibition and attended the opening ceremony of the International Army Games on Sunday at Russia’s Patriot center.

Karapetyan held a number of meetings with the heads of the major Russian military-industrial companies and discussed issued of bilateral interest, Armenia’s Defense Ministry reported.