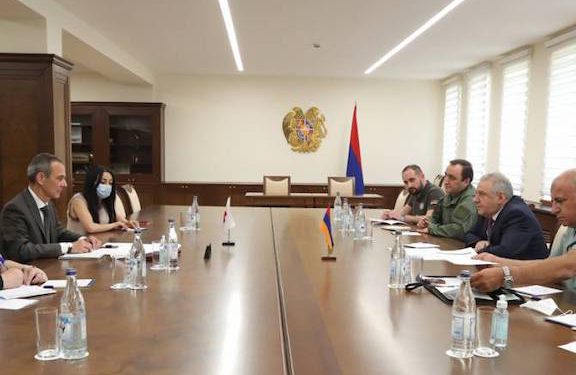 The fate of Armenians missing in action or captured during last fall’s war was discussed during a meeting Friday between Armenia’s Defense Minister Vagharshak Harutyunyan and members of the International Committee of the Red Cross led by the organization’s head of delegation to Armenia, Thierry Ribo.

Harutyunyan expressed concerns over the fact that Azerbaijan continues to conceal the actual number of Armenian prisoners of war and civilian captives as it attempts to politicize this humanitarian issue.

The defense minister said that Baku’s actions constitute a gross violation of not only international laws, but also the November 9 agreement.

Last week, ICRC representatives in Baku visited the six Armenian soldiers who were captured on May 27 from Armenia’s Gegharkunik Province by Azerbaijani forces, who on May 12 breached Armenia’s border sovereign border leading to a month-long standoff on the Armenian , who have been recently taken captive by the Azerbaijani armed forces while conducting engineering works in the Gegharkunik province border section of Armenia, ICRC Armenia Delegation’s Communications Program Head Zara Amatuni told Armenpress.

Zara Amatuni, a spokesperson for the Red Cross office in Yerevan told Armenpress last week that the ICRC representatives in Baku became acquainted with the detention conditions of the Armenian servicemen, their health and assisted them in communicating with their families.

On Friday, Defense Minister Harutyunyan thanked the head of the ICRC Armenia delegation for its efforts to protect the rights of the Armenian citizens being held captive in Azerbaijan.