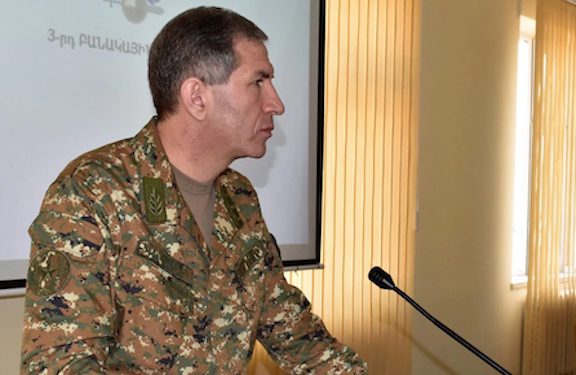 The top leadership of Armenia’s military on Thursday demanded the resignation of Prime Minister Nikol Pashinyan and his cabinet, saying that patience of the Armed Forces has reached its limits in the wake of government’s continued “defamation” of the military.

Armed Forces Chief of Staff Colonel-General Onik Gasparyan issued a statement saying that the prime minister and the government are no longer able to make adequate decisions.

“Armenia’s prime minister and government are no longer able to make adequate decisions for the Armenian people in this crisis and fateful situation,” Gasparyan said in a statement that was he and about several dozen high-ranking military officials signed.

“The Armenian Armed Forces have long patiently tolerated the current authorities’ ‘attacks’ aimed at discrediting the Armed Forces, but everything has its limits … The authorities’ inefficient governance and very serious foreign policy mistakes have put the country on the brink of destruction,” charged the statement.

“The army has always been with the people, just like the people are with the army,” Gasparyan added in the statement.

This announcement thrust the country in a volatile political situation

Evidently, the statement was triggered by the abrupt firing of Gasparyan’s first deputy, Tiran Khachatryan, which was deemed by the Armenia’s top military leadership to be “irresponsible and move against the state,” which was characterized as having been made on Pashinyan’s whims, with disregard to Armenia’s defense and security needs.

Thursday’s statement came amid continuing protests by the opposition Homeland Salvation Movement, which has been demanding Pashinyan’s resignation since he signed the now infamous November 9 agreement that ended military action in Karabakh but saw the surrender of territories in Armenia and Artsakh to Azerbaijan.

Pashinyan’s reaction was, once again, to deflect responsibility. In a Facebook post on Thursday afternoon local time, he condemned the military for he called engaging in politics and making political statements, urging his supporters to gather at Republic Square where he again refused to step down. He also accused the military of attempting a coup.

Instead, he invited political forces to discuss the current state of Armenia’s fragile domestic situation.

The Homeland Salvation Movement hailed the military announcement with its candidate for prime minister, Vazgen Manukyan, calling for the Armed Forces to take the reins of the country.

“This government must resign and transfer the leadership to the army. This must be done willingly and without any turmoil, which can be detrimental,” Manukyan said in a statement issued by the Homeland Salvation Movement.

“By taking the reins of the entire government, the Army, must form a unified defense committee with Artsakh and undertake immediate steps in the current war conditions, by securing the trust [of the people] and begin negotiations with stakeholder countries and international bodies,” added Manukyan.