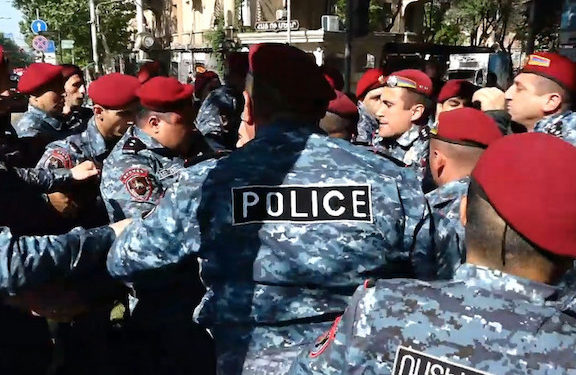 Opposition leader and deputy speaker of the Armenian parliament Ishkhan Saghatelyan announced on Wednesday that Armenia’s Police Chief Vahe Ghazaryan had informed him that one police officer has been suspended and 37 others were under investigation for allegedly using brutal force against opposition protesters.

Saghatelyan and other opposition lawmakers met with Ghazaryan Wednesday to present their demands as arrests of protesters skyrocketed during the past two days with police arresting over 400 protesters on Tuesday and some 350 on Wednesday. Incidents of use of brutal force has been registered by opposition observers, as well as the office of Armenia’s Human Rights Defender, which issued a report with a stark warning to law enforcement about the violence.

Saghatelyan told protesters gathered in front of Armenia’s police headquarters that their demands to suspend officers who have used violence against protesters was heard by Ghazaryan and other high-ranking law enforcement personnel who attended the meeting.

“Today’s cases are being investigated and the police will make a statement shortly on specific cases,” Saghatelyan told protesters outside the police compound on Wednesday. “You know that during this period more than 80 cars were illegally confiscated during the rally, and we agreed that these cars would be returned to our compatriots.”

According to Saghatelyan, the lawmakers informed the police leadership that the disproportionate use of force against protesters would not deter their “Resistance” Movement.

Since May 1, thousands of opposition protesters have taken to the streets of Yerevan in daily demonstrations to demand the ouster of Prime Minister Nikol Pashinyan, whom they accuse of “selling out” Artsakh and endangering Armenia’s sovereignty through his policies.

Before leading the procession of protesters to Yerevan’s French Square where rallies have been held nightly for almost three weeks, Saghatelyan announced that most of their demands had been met, but they will be consistent and will wait for results.

The office of Armenia’s Human Rights Defender on Wednesday issued a five-point report detailing some instances of violations by law enforcement officers against protesters.

One instance recorded by the defender’s office was the attempts to arrest opposition lawmaker from the Armenia Alliance, Artsvik Minasyan. Attempts were made to force Minasyan into a police vehicle, preceded by pushing and tugging at the lawmaker. The Human Rights Defender’s office noted that members of parliament cannot be arrested, unless they are observed committing a crime or shortly thereafter.

A second incident that was registered involved the beating of two minors at the Demirchyan metropolitan center. The defender’s office explained that use of force and humiliating a person can lead to criminal prosecution.

“It is especially unacceptable to commit such acts against an apparent minor,” the Human Rights Defenders office reported, adding that contact was made with law enforcement command, which said the incident was being investigated.

In discussions with some of those arrested, the Human Rights Defender’s office recorded testimony about the alleged use of disproportionate physical force, including blows to their heads.

The defenders office also registered instances where individuals who were not taking part in the protests were arrested simply because they were at nearby sidewalks for parks. A failure to comply with legal requirements by police was cited by the Human Rights Defender’s office.

The report also recorded incidents of protests shouting at or provoking law enforcement officers. The report did not hold protest organizers accountable for the behavior of individual protesters, but said such actions prevented the police from doing their jobs.