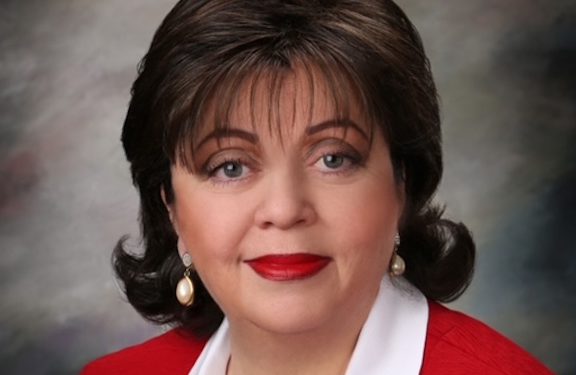 GLENDALE—The Glendale Community College District Board of Trustees has unanimously elected Dr. Armine Hacopian to serve as its Board President. The vote on April 20, 2021 marks the fifth time Dr. Hacopian will serve as Board President since 2001 when she was first elected to the GCCD Governing Board. She is one of the very few trustees in the California Community College system (116 community colleges, 72 districts, 440 trustees) to be elected five terms and to be selected to a fifth term Presidency.

“I am honored to serve the college and community in this important role and to work in close collaboration with the other four members of the GCC Board, GUSD, and City Council,” said Dr. Hacopian upon being selected to lead Glendale Community College.

Along with her co-trustees, one of her most important decisions made has been to have selected Dr. Viar to be the Superintendent/President of GCCD. She is of the opinion that Dr. Viar, an award-winning and highly respected educator, is one of the most successful and visionary CEO’s in California as evidenced by the annual evaluations and rankings. “Dr. Viar’s steady leadership has helped the college successfully transition to a remote learning environment in order to keep our students, faculty and staff safe while maintaining the high standards of education for which GCC is known. In addition, a highly qualified cadre of faculty and staff put forth their best effort to teach and support students so that their educational goals remain uninterrupted due to the pandemic.”

Another important accomplishment of her tenure, has been working closely with State Senator Anthony Portantino to pass Senate Bill 568 which authorizes GCC to close campus on April 24 to commemorate the Armenian Genocide Remembrance Day without any loss of funding.

“On behalf of ANCA Glendale, we would like to congratulate Dr. Hacopian for serving as GCC Board President for her fifth time. We would also like to commend her for her unwavering dedication to the Glendale community and Glendale students” said ANCA Glendale Chairperson Lucy Petrosian. “We have had the honor to work side by side with Dr. Hacopian in advocating for Armenian American issues on an academic level, and we are looking forward to tackling more initiatives with our collective efforts.”

Dr. Hacopian proudly indicates that Glendale Community College has consistently earned maximum possible accreditation in California and that GCC has repeatedly earned a ‘Champion of Higher Education’ award for being one of California’s top colleges granting Associate Degrees for Transfers to four-year universities. Also, GCC is recognized as the number one community college in America for upward economic mobility. Also, GCC is ranked as one of the top most beautiful campuses in the Nation.

Dr. Hacopian cites that just like herself when she first came to America at the age of 16, without knowing any English, many students begin their college journey by taking English as a Second Language (ESL) classes. At GCC, these courses are offered at the Verdugo Campus and through Continuing Education at its Garfield Campus.

According to Dr. Hacopian, GCC is committed to fostering an environment where all students (40% of whom are of Armenian heritage) are welcome to pursue their educational goals. Despite the challenges created by the pandemic over of the last thirteen months, through the efforts of the Board and GCC’s leadership, GCC has made much progress in its commitment to creating and upholding an anti-racist and anti-bias learning environment.

Dr. Hacopian remarked, “that even during the pandemic, the college has continued its efforts to expand services to the community through expansion of facilities and the development of new programs and courses.” She would like the readers to know that through the leadership of the GCC Board and Dr. Viar, construction of a new athletics and physical education facility has moved forward with an anticipated opening date in fall 2021. Ground breaking has occurred for a five story, state-of-the art science building to open in 2023 and planning is advancing for a new music, dance, media arts, and kinesiology facility and conference center. And, since July 2020, 18 new courses and programs have been developed and 229 courses revised to reflect the new higher education mandates and the ever-changing career trends geared for the 21st century. She extends her most sincere gratitude to Glendale residents who prioritized the educational needs of GCC students in 2016 by voting to pass Measure GC, a $325,000,000 improvements bond measure without which none of the improvements would have been possible.

It is important to note that Dr. Hacopian has been a life-long educator who holds a BA, two MA’s, six credentials, and a doctorate in Organizational Management and Educational Administration. She has been a teacher, counselor, ESL Specialist, program administrator in K-12 for LAUSD, BUSD, and GUSD. In addition, she has taught at CLU, CSULA, and CSUN graduate schools in public policy, teacher training, and counseling programs. She continues to serve on thesis and doctoral dissertation committees which has become a platform for her through which she encourages students to earn advanced degrees. Also, she served on the Western Prelacy Board of Regents for many years.

Dr. Hacopian has been a keynote speaker during numerous conferences, seminars (public and private entities) and trainer-of-trainers for leadership in a-variety of areas. As a consultant she has focused on employee evaluations, job satisfaction strategies, cultural diversity, preventing sexual harassment, organizational goal setting, gender equality are to name a few. She has participated in various college/university accreditation teams which has enabled her to bring to GCC some of the best practices in higher education. She has served on numerous boards and has brought her leadership, commitment and dedication to serve the community for which she has been honored by numerous organizations. In addition, she has been recognized by LA County, CA Senate, CA Assembly, and Congressional elected officials for her contributions to the field of education.

As President of the Glendale Community College Governing Board, Dr. Hacopian would like to remind full-time students (those who qualify) that attending GCC may be tuition free for them. She encourages high school students and community members to consider attending GCC to further their English language and computer skills, to improve their career paths, to expand their knowledge of life skills, and to increase their chances of getting into the best universities after successfully completing the required two-year transfer coursework at Glendale Community College.

Dr. Hacopian is married to Vahe Hacopian (cofounders of Chamlian) and they have two daughters and five grandchildren, all of whom attended Chamlian Armenian School for their elementary education.