Editorial: 2020s Should Be the Decade of Advancement and Victory 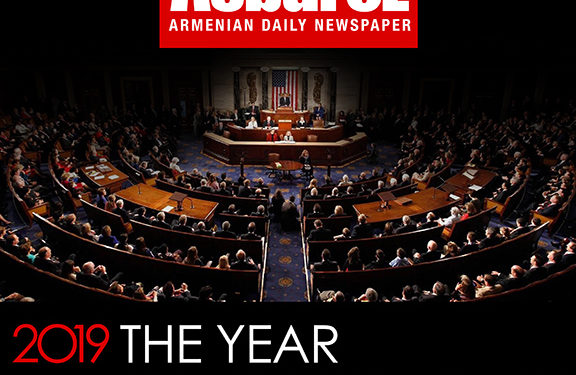 We are about close a decade that was filled with challenges, missteps, successes and victories. The lessons of the past 10 years should certainly inform our expectations for the next decade and our approaches to our national issues must propel us to take action and build upon the accomplishments we achieved in the past year and the past decade.

The 2010s, in retrospect, started rather bleak with the now trashed and dangerous Turkey-Armenia protocols casting a grim shadow over the entire nation and undermining the decades-long struggle for justice for the Armenian Genocide. As we enter the 2020s, the misguided Armenian leaders who initiated and engaged in that process were toppled and Turkey’s stock in the international community is at an all-time low for its leaders’ grotesque violation of human rights and complicity in advancing terrorism around the world.

There is no question that the unequivocal opposition to the protocols by a majority of Armenians who recognized the inherent dangers they posed to Armenia’s national security was a key factor in that doomed effort’s failure. The fact that it took ten years for its demise can be seen as a lesson never to be repeated.

The centennial of the Armenian Genocide brought an almost universal call for Turkey’s recognition of that crime. From the altar of the Vatican, from where the Pope declared it the first genocide of the 20th century, to legislatures, academic institutions and editorial boards of major publications around the world calling for an end to Turkey’s denial, the world spoke in unison about universal justice bringing to the forefront the plight of the Armenians and our individual and collective resolve to persevere as a nation. The German Bundestag’s recognition of the Armenian Genocide can be singled out since the lawmaker who spearheaded the effort was of Turkish descent.

The centennial also served as an occasion for Armenians around the world to come together and not only to remember the victims of the Genocide, but to also celebrate the Armenian Nation. Nowhere was that more palpable that in Los Angeles where 165,000 turned out on April 24, 2015 to March for Justice. The procession of world leaders at Dzidzernagapert on that day also reinforced the global importance of recognition and commitment to justice.

The unprecedented triumph came during the latter weeks of 2019—and the decade—with the almost unanimous recognition of the Armenian Genocide by the House of Representatives and the U.S. Senate in identical resolutions that finally shattered Turkey’s chokehold on U.S. foreign policy. Every single Armenian played a role in this victory as our decades-long advocacy in Washington, through the Armenian National Committee of America, evolved into a sophisticated and contemporary movement to advance the issue, making the Armenian voice one of the most powerful in our nation’s capital.

In the 2020s we must collectively harness that power to advance our issues, keeping in mind that our just national cause is far from being resolved, because our aspirations do not hinge on Genocide recognition but have a more far-reaching scope at the center of which is our homeland. Our advocacy has and must include issues that will strengthen Armenia as a country and will advance the issue of self-determination and security in Artsakh.

The indiscriminate and full-force attack launched by Azerbaijan in April 2016 reminded us all of the fragile state of the peace process, but also demonstrated to the world the unwavering resolve of the Armenian people. Our brave soldiers, joined by volunteers repelled the enemy on the frontlines, while Armenians around the world, once again, rallied in support of Artsakh. As international mediation efforts for a settlement of the Karabakh conflict continue, we must not allow the [Madrid] principles guiding those talks to move forward as they are based on rewarding the aggressor—Azerbaijan—at the expense of the people—Artsakh.

The 30th anniversary of the Artsakh Liberation Movement was marked in 2018. As we close the decade and look ahead, our efforts should focus of garnering international recognition for the right to self-determination of the people of Artsakh and its independence and reject any effort to displace the people from their ancestral lands. There can be no concessions of territory and the people of Artsakh must decide their own fate.

Decades of oppression and usurping the nation’s wealth by leaders in Armenia and their cronies exploded in popular movement in Armenia in 2018 toppling the former regime and ushering in a new set of leaders who for the past 19 months have been promising far-reaching reforms that will put Armenia on the “right” socio-economic track and elevate the nation to new heights.

Indeed the popular movement instilled hope and proved that the people can take the reins of their own destiny. As the regime change nears its two-year mark it is imperative for the government to abandon its rhetoric and get to work on the reforms that it pledged. This is also a critical moment for Homeland-Diaspora relations, as Armenians dispersed around the world must play a crucial role in the advancement of the homeland. Armenia’s leaders must not squander this opportunity and political forces in Armenia should refocus their efforts into elevating the homeland and becoming part of the solutions that will make a strong Armenia.

It might have been a coincidence that the popular movement happened weeks before the centennial of the Armenian Independence. As we look toward the new decade, lessons from the First Republic must guide us to advancing our nation.

As Paruyr Sevak so aptly said Սերունդներ դուք ձեզ ճանաչէք Սարդարապատից—generations [should] know themselves from Sardarabad. We must advance and cradle that concept of national salvation and spare nothing for achieving it.

The 2020s should go down in history as a decade of advancement and victories. The challenges and events of the past 10 years have given us the critical tools to achieve that.