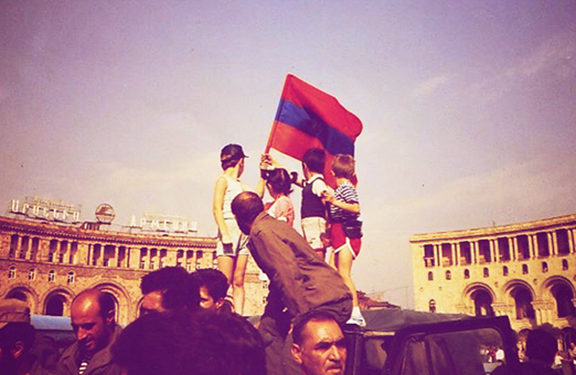 Independence Day in Yerevan on September 21, 1991

No one can forget the pride and elation felt by every Armenian when 30 years ago today—September 21, 1991—Armenia shed its dependence from the Soviet Union and became an independent nation. Every year on September 21 we, as a Nation, affirm our commitment to Armenia’s statehood and reflect on the fact that this independence has lasted longer and continues to prosper.

Soon after the 29th anniversary of Armenia’s independence, our enemies—Azerbaijan and Turkey—launched full throttle attack on Artsakh, as a result of which thousands of Armenian soldiers and civilians were killed and territories in Artsakh were being surrendered to Azerbaijan.

Today, a similar scenario is playing out on Armenia’s borders, where Azerbaijani forces have set up positions in the Gegharkunik and Syunik provinces, while simultaneously attacking regions in the Ararat Province border Nakhichevan.

Armenia’s authorities, on the other hand, are advancing a nebulous policy of “peace in the region,” and advancing the notion of opening borders with Azerbaijan and engaging in dangerous negotiations with Turkey to normalize relations—all forced upon Yerevan by Armenia’s “strategic ally,” Russia.

It became apparent last week that after signing the defeatist November 9 agreement, Prime Minister Nikol Pashinyan in December had relinquished a 13-mile stretch of the Goris-Kapan Highway in the Syunik Province—a provision not delineated in the agreement.

The events of the past week, and the past year, have come to solidify a nagging reality that for 30 years, Armenians around the world who rallied to protect and strengthen the Armenian homeland were unaware of lingering border demarcation issues, which were inherited from the Soviet times and not addressed by successive governments and leaders.

Today, as we mark the 30th anniversary of Armenia’s Independence, protecting, buttressing and nurturing that independence has become an existential imperative, for which, more than ever, national unity and consolidation of efforts is critical if we are to hold on to our independent homeland.

The time has come for all political forces in Armenia, be they within or outside of the decision-making echelon, must advance policies that do not jeopardize Armenia’s sovereignty, and more important, ensure that those policies are not more beneficial to outside players, some of whom pretend to be our “strategic” ally.

There is not alternative to independence and after 30 years, as fragile and tenuous as it might be, we, as Armenians, have a duty and responsibility to ensure its perseverance and vitality.

The past year has been marred and marked by unimaginable losses for our nation. As difficult as it may be, given that we have not collectively grieved as a nation, let this milestone anniversary of Armenia’s independence serve as that crucial springboard that we need to gather our strength and recommit ourselves to Armenia, Artsakh and prosperity of our homeland, because our hard-won independence cannot—and must not—be compromised and it must be preserved at all costs.