EDITORIAL: Asbarez Continues to Stay True to its Mission 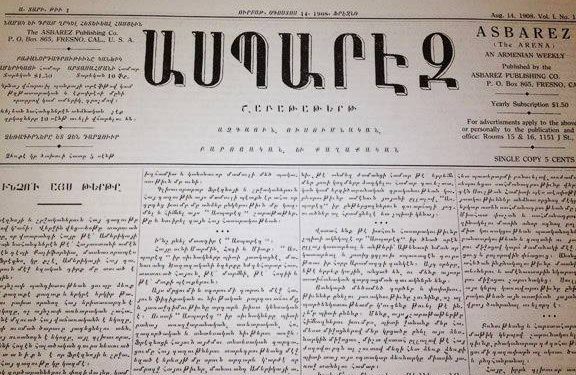 For 113 years, Asbarez has proudly served the Armenian-American community and the Armenian Nation through one simple mission—to provide an arena for our changing community and become a bridge between our Diaspora community here in the Western United States and the homeland.

“The school, the Church, community organizations all have their role in satisfying the national, spiritual and social needs of the Armenian people. Equally, if not more important, is the role of the press, news and the newspaper,” so declared an editorial in the first edition of Asbarez published on August 14, 1908 in Fresno.

The secret to Asbarez’s longevity has been its ability to adapt to the changes that have not only advanced our community, but have also contributed to the progress of the world.

Asbarez is not a mere Armenian newspaper. It is the newspaper of record for the Armenian-American community in the Western U.S. Every letter and word that has been published in Asbarez is part of the storied and venerable history of this every-progressing community.

We take pride that we have not veered from the ideals of freedom, independence, justice and national unity and have remained loyal to the principles of freedom of speech, and of comprehensive and factual reporting. That has been the catalyst for us to amass such a loyal readership—Armenians and non-Armenians alike—which has come to trust Asbarez as its main source of information.

The tremendous efforts and sacrifices of so many editors, writers, staff, contributors, supporters and generous donors has ensured that Asbarez remains an integral part of not just the community, but also the nation.

Throughout the years, Asbarez has had its share of critics and those who have actively pursued its demise but have failed miserably. Generations of Asbarez staff members have countered the Soviet propaganda machine and Turkey’s vile efforts to disrupt our progress.

In recent days, a group of individuals in our own community, clearly spurned by their narrow-minded and petty self-interests, are attempting to tarnish the reputation of our venerable institution and, mainly via social media posts, are encouraging the community to “not read” Asbarez, sowing divisions at a time when national unity is paramount to the salvation of our nation. It is not only ironic but also mind-boggling that some members of this group would not have garnered notoriety in the community had it not been for Asbarez publishing their articles and op-ed pieces.

We are undeterred by the actions of these self-serving people and will continue serving the community and our nation by continuing to adhere to the ideals and principles of the Armenian Revolutionary Federation, whose countless generations of intellectuals and academics have elevated Asbarez through their active participation in its progress.

We are also confident that our loyal readers, community organizations, advertisers and donors will continue their support of Asbarez and its future successes.