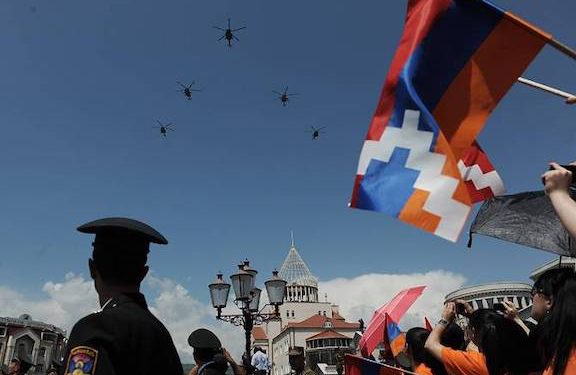 A past celebration of Artsakh's independence

Artsakh’s declaration of independence was the natural and seamless continuation of a heroic National Liberation Movement that began in February 1988 when the people of Artsakh rose up and demanded justice—they demanded to exercise their fundamental right to self-determination.

That fundamental expression of will came at an unimaginable sacrifice. But when our sisters and brothers in Artsakh raised their clenched fists and demanded to be heard, the entire Armenian nation rallied behind them and became active participants of the Liberation Movement. The people of Artsakh were so determined to attain this basic right that they sacrificed their lives and through blood, sweat and resilience fought the enemy and asserted their independence through a resounding victory.

Today, that independence is threatened and the possibility of another commanding victory seems out of reach. Almost 10 months after the end of the 44-Day War, every Armenian is attempting to make sense of that mammoth blow to the gut that was the November 9 agreement, based on which the lands we won back, cherished and called our ancestral home were forcibly surrendered to the enemy in a remarkable defeat not seen in generations.

Emboldened—and even encouraged—by our “strategic ally,” our enemies have put the threats they so freely dispensed for 30 years into action, and, on a daily basis, are taking aggressive steps to assert themselves, most recently on Armenia’s sovereign territory.

It is an unfathomable reality whose end is increasingly hard to imagine.

Yet if view the events of the past year—or even the past week—through a wider historical prism, and while we add the 44-Day War and its aftereffects to the larger canvas of tragedies and losses we have experienced as a nation, we can look at the current reality as a unanticipated—and major—setback that brings with it a host of complicated challenges.

History has shown that the Armenian people are resilient and when they fall they rise up more fiercely and with a stronger conviction.

As difficult as it may be, given that we have not collectively grieved as a nation, let this milestone anniversary of Artsakh’s independence serve as that crucial springboard that we need to gather our strength and recommit ourselves to Artsakh, because our hard-won independence cannot—and must not—be compromised and it must be preserved at all costs.