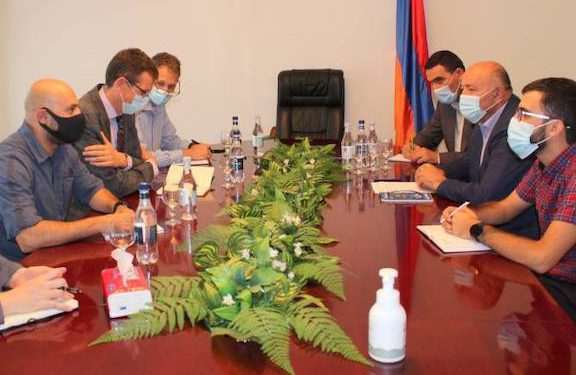 Embassy Says ‘Syunik is a Priority’

Syunik is a priority for the activities of the United States Embassy in Armenia. This message was conveyed Tuesday by the U.S.’ Deputy Ambassador Chip Laitinen when he met with Syunik Governor Melikset Poghosyan.

Laitinen, who has assumed the deputy ambassadorial position, said that he and his delegation began their tour of Armenia by visiting Syunik first at the request of Ambassador Lynne Tracy.

The deputy ambassador to Poghosyan that he wanted to become acquainted with the situation on the ground and understand how the U.S. Embassy can continue to support democratic and economic development, as well as learn about security issues.

Poghosyan briefed the American Embassy delegation on the current situation in Syunik, which includes the more that four-month border standoff, which has resulted from the Azerbaijani forces’ breach of Armenia’s sovereign borders. Poghosyan detailed the concerns of the leadership and population of the region, and the new challenges facing the area after the Azerbaijani incursion.

During the meeting the parties discussed issues related to security, roads and traffic, economic and other concerns.

Poghosyan expressed readiness for further active cooperation, and referring to programs implemented by the USAID in the region, he expressed hope that they will be continuous.

Laitinen was accompanied by the embassy’s military attaché and head of its political and economic office, both of whom have been recently appointed to their posts.