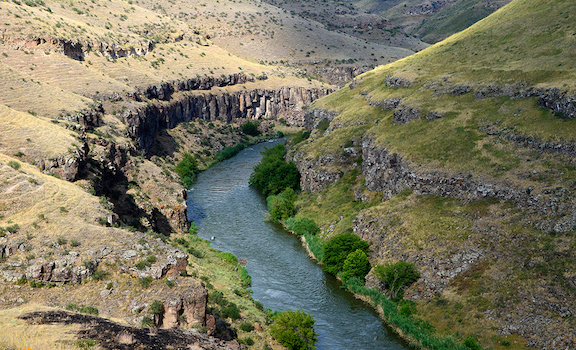 The banks of the Arax River

President Recep Tayyip Erdogan of Turkey on Monday claimed that his Azerbaijani counterpart Ilham Aliyev has informed him that the issue of the construction of railway and roads along the Arax River was “resolved” during a meeting between the leaders of Armenia, Russia and Azerbaijan in Sochi on Friday.

”The issue of building railways and roads along the Arax River has been resolved,” Erdogan claimed that Aliyev informed him on Sunday during the Economic Cooperation Organization in Ashgabat, Turkmenistan.

“The construction of a highway passing through Armenia through Nakhichevan to Turkey’s Igdir Province is on the agenda,” added Erdogan, emphasizing that with these projects the parties will take a step toward the development of air and cargo transportation in the region.

The ECO is comprised of all five Central Asian countries (Turkmenistan, Kazakhstan, Tajikistan, Kyrgyzstan, and Uzbekistan), as well as Afghanistan, Azerbaijan, Iran, Pakistan, and Turkey.

While the unblocking of communications and transport links between Armenia and Azerbaijan was discussed during the Sochi talks organized by President Vladimir Putin of Russia, the official announcement by the three leaders did not include specifics about the discussion. Putin hailed the meeting as “extremely constructive” on Friday.

Putin said the details of the so-called unblocking process will be announced by the deputy prime ministers of the three countries, who form a special task force to oversee the matter.

In Ashgabat Erdogan and Aliyev also discussed the so-called “Zangezur Corridor” that they hope will link Azerbaijan proper with Nakhichevan, and ultimately Turkey, through Armenia.

“Today I can say that the Zangezur Corridor is becoming a reality. This new transport infrastructure will become an important part of the East-West and North-South corridors. I am sure that OIC member-states will use that corridor,” the APA news agency quoted Aliyev as saying.

According to the same source, Erdogan said that the significance of the “Zangezur Corridor” is well-known and stressed that special attention should be paid to the development of transport corridors.

Yerevan has rejected any “corridor” plan, while Moscow has stressed that the process of unblocking transport link must respect the territorial integrity and sovereignty of the states through which they pass.

On Monday, Erdogan also discussed the so-called “3+3” plan, which is a plan put forth by Ankara and Baku and envisions the formation of a transportation and economic bloc involving Russia, Armenia, Azerbaijan, Georgia, Turkey and Iran.

“The activation of this dimension, with the participation of Russia, Turkey, Azerbaijan, Armenia, Iran, and if they agree, Georgia, will prove that there is regional peace,” said Erdogan. “We see that there are positive steps in that direction.”

Georgia has officially stated that it is against this scheme because of Russia’s participation.

Saving Syunik: The Inception and Execution of KorniTun, Powered by All for Armenia, Miaseen